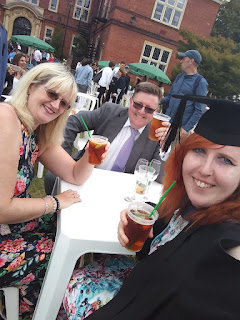 Holly, our daughter, Laurel and I on the occasion of Holly's graduation. Pimms for the ladies  whilst yours truly supped on a very nice summer ale, the name of which escapes me.

It has been a busy and eventful week for a number of reasons. The main news was the graduation of our daughter, Holly. he has just completed a four year combined honours degree in art and psychology at the University of Reading, gaining a 2:1 (and a vast amount of student loan as well....) as reward for her efforts. For a variety of reasons (other than being her dad of course!) I am properly proud of her and what she has overcome along the way and achieved and am not ashamed to admit it was a teary eyed and proud dad that watched her take part in the graduation ceremony! It was a wonderful day and even the best efforts of the M25 (over three hours each way - it normally takes just under two) and the morning rain could not dampen our spirits.

The last of the Minifigs Seven Years War figures have found a new home and so will be heading off during the course of this week. The Marlburians are hopefully next but I need to finish sorting these out for listing and photographing. Then I can think about Eric's WW2 collection which should be arriving soon.

I have landed myself with a rather delicious dilemma. To cut a long story short I shall be taking delivery of a collection (unpainted naturally) of Foundry 28mm pirates and also some of their old El Dorado range of Conquistador types. The pirates are most welcome although it does mean that tackling the same in 15mm as originally intended will not now take place. I shall still be using the Peter Pig ships and possibly even the Pieces of Eight rules using a single 28mm figures in place of a base.

The El Dorado range would normally be associated with the Spanish (visions of painting hordes of Aztecs has been giving me sleepless nights!) but, being the typically unfashionable gamer that I am I have decided that if I ever get around to doing something with them they will instead be Portuguese. The main reason for this is that they went South and East whilst the Spanish went West meaning that the variety of opposition is rather more interesting. I am thinking something along the lines of Lion Rampant or the Pikeman's Lament for the rules but lets see where my thoughts and research take me.

As part of my piratical research I was able to acquire a modest selection of books from the all round good egg that is Tamsin Piper. Rather embarrassingly these books were the same ones I had disposed of in the other direction a few years ago - we had a chuckle about this when we met and put it down to the cyclical nature of gaming projects! Many thanks once again Tamsin for taking the time out to meet up. 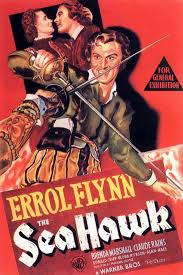 Great fun - what I would call a 'Sunday afternoon' film

Although slightly earlier than the pirate period I am looking at I finally got around to watching the two classic Errol Flynn films: Captain Blood and The Sea Hawk. It is hard to believe that I have never seen these - at least I do not remember having done so - but at long last I now have. Alongside of watching these I am also reading the complete works of Rafael Sabatini as both of the films were based on his novels of the same name - the latter very loosely - this was real a shame in my opinion as the novel The Sea Hawk would make a great film in its own right. Sabatini of course also penned Scaramouche - "He was born with a gift of laughter and a sense that the world was mad" - which is one of my favourite films starring Stewart Granger as Andre Moreau and featuring a quite thrilling sword fight ast its climax.

Work on the Last Crusade scenarios has moved along slowly but I am getting there. I am hoping to run the first action at some point next month so will keep you posted.

I'd never heard of 'summer ale' before I went to the states recently. Obviously not out drinking enough!
Congratulations to your daughter on her graduation.

Many thanks old chap! The 'summer ale' is lighter than a bitter and has a more fruity flavour. It went down very easily and it not been for the fact I was driving I may well have had another!