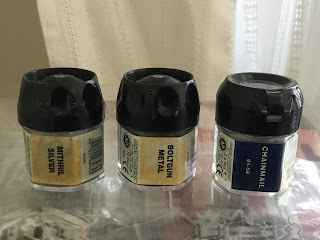 Games Workshop metallic acrylics. Purchased lord alone knows when and incredibly still usable. Whilst sorting out the selection of GW paints I have the above three were the only metallics to survive as the various gold and bronze colours were beyond salvaging.

Regular readers of this blog will no doubt be aware of the fact that as far as painting goes my relationship with can best be described as casual. It was not always so and indeed, to this day stick a spaceship, ‘mech, or anything that floats (as long as it is not sail driven - I cant be doing with all that Nelson chequer malarkey!) in front of me then I will happily tackle it. My painting technique has barely evolved from 1972 and is still predominantly enamel driven although as a sop to those new-fangled acrylics I rather like using their metal colours - mainly because they do not tend to ‘lift’ when applying the varnish. I still own some 300 or so tins of enamel including some unopened Humbrol Authenticolours purchased God knows when! I prefer a white undercoat although my WW1 warship and most Sci Fi types technique uses the black version. I went through a phase of using a smidgeon of black paint in the varnish to add some depth to the figure but have not done so for some time, mainly because I have not painted anything that needed it. Washes, shading, highlighting or other such ‘advanced’ techniques have completely passed me by.

Two things have changed my mind about painting to the extent that I want to do so again but within my own frame of reference so to speak. The Del Prado collection for one and also the venerable old Spencer Smith figures.

The painting on the Del Prados varies quite substantially but for the most part is block colours but with the detail. Very similar in fact, to my own technique of yesteryear. The Spencer Smiths are a slightly different story in so much as seem to be ideally suited to the basic painter simply because there is not a great deal you can do with them other than to tidily dress them for action and rely on the mass effect.

There is a reasonable amount of tidying up to do with the Del Prado collection including the oft mentioned paint conversions so I figures it would be a good idea to sort out the paints and see what I had and what I needed to get. At this point I decided that I would stick with enamels simply because I have so many of them and replacing them wholesale would be quite an undertaking, as well as not cheap. As luck would have it I have pretty much all I will need to tackle this and as a further piece of good fortune our local DIY shop carries the Humbrol range which is very handy. I checked my small supply of GW paints (most of which were purchased when Battlefleet Gothic was released in 1999) and many of them had to be consigned to the bin. I was really pleased to have salvaged the colours you see above though.

I have rather a lot of Spencer Smith ACW figures left over. If you remember I purchased a couple of armies for my Kurz and Allison project just before Old Painter Bob loomed over the horizon and sent me the painted ACW figures he had amassed for a project he had shelved. He then went on to add some additional bits and pieces to round off the organisation for me for which I was immeasurably  grateful. Bob had used a different Confederate infantry figure than the one I had selected and had also  produced the Rebel cavalry wearing the kepi. All the Confederate infantry I purchased were the variety wearing a pack rather than a blanket roll whilst the mounted arm is wearing a hat.

One of the key things about the Kurz and Allison style of ACW army is uniformity, even for the gentlemen of the South, which of course completely defies the historical reality. So what should I do with all those excess figures? I read somewhere that in the Western theatre the hat was not solely confined to the Rebels so there was a possible answer. I could add a couple of hat wearing infantry and cavalry units and it would not matter if they were different to the two thirds of the collection that Old Painter Bob had tackled.

One of the biggest attractions of this for me is that Old Painter Bob’s painting style for these figures in theory should be easy enough for me to copy and so to add units that will not look too much out of place. His output is prodigious and is of a high quality which I would not be able to compete with but at least what I can get done will fit in nicely.

Another potential use for some of the kepi wearing extra figures I have (not as many as for the hat wearing types) is something that is more than a little off the wall. Many of the troops that fought in the War of the Pacific wore uniforms very similar in cut to that of the Union forces of the ACW but rather more colourful. In fact some of them would not look out of place in a self respecting 1860 to 1880 imagi-nation but let’s not go there. Not just yet anyway.

So what was the point of this post then? Well, I am tentatively looking at dipping my toes (actually a brush as I sure that would work better) back into figure painting - shock, horror! - and so am readying the materials I have and thinking about a couple of ideas I can explore to ease my way back in.

The painting quality and techniques used will be ‘old school 1972 vintage’ but as I have seen many wonderful examples of figures painted in this style I certainly do not feel self conscious about it nor of not indulging in the much higher standards of brushwork that seems to be de riguer these days.

It will certainly stand me in good stead with the Del Prado collection and who knows? I might even enjoy the experience....