The Portable Colonial Wargame - Is Here! 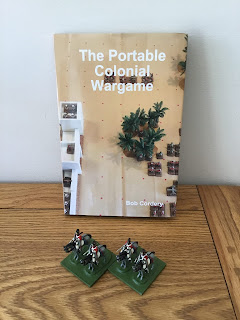 Oh yes indeedy! That will be my reading sorted for the next few days as well as allowing me to paint convert another Napoleonic British cavalry unit

It is always good when packages arrive - probably even more so given the current circumstances we find ourselves in - and so today I was highly delighted when this particular one arrived from Bob Cordery.

The latest book in the Portable Wargame series has raised the bar of quality and inspiration even further but this is of little surprise given the author’s well known interest in the period. This book has been a real labour of love and it certainly shows. There are a selection of rules, ideas around terrain generation, heroic leadership (just right for the deeds of derring-do one usually associates with the period!) and the use of ‘modern’ technology - railways, steamships and even aircraft in the latter stages. I will submit a more detailed review once I have given it some attention but suffice it to say this volume is a welcome addition to the Portable Wargame stable and for me should provide the impetus to at last get my 15mm Arab Revolt on a war footing. 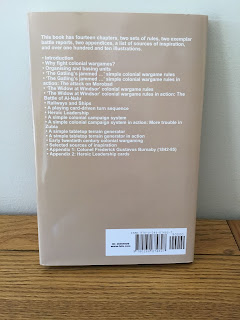 The contents to give you some flavour - for me the battle reports, terrain generator (which would be readily usable for other periods) and the chapter on early 20th century Colonial Wars are of particular interest

I read this book in draft form and seeing it both freshly printed whilst holding a real copy in my hands is hugely inspiring and for anyone with an interest in the period or of the so called ‘small wars’ I would highly recommend it.

In the package was also another welcome addition to my Del Prado collection in the shape of four British Lifeguards. I now have 13 figures in total and plan to paint convert 6 of these into the Royals.

In both cases many thanks to Bob for helping to push along one project and to inspire me to finally start the other!

I hope that you get lots of fun and ideas from the book ... and I look forward to seeing your Arab Revolt project finally begin to take shape.

There is plenty of inspiration in there for sure and I really have no excuse for not doing something for the Arab Revolt! I have virtually all the figures I need to start with and what I want to add to it is fairly modest.

It will be difficult to stay focussed for the time being but I will try my best!

Many thanks once again for the figures - this will be a relatively straightforward paint conversion but means I will have two units.