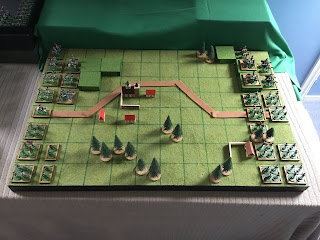 The opening positions. The French are on the right whilst the Anglo-Dutch are on the left. The small Belgian village of Chimay is closer to the Allied start line than the French which should serve to help offset the small numerical advantage Napoleon’s men enjoy.

This is very much a cobbled together effort. In order to get a game in I had to use my 3ft by 2ft square grid with 3” squares (12 x 8) as my usual gaming table was occupied by various boxes and to be honest, it would have been a major hassle rearranging the man cave to accommodate a larger playing surface. I am planning on using the Brigade level rules from the Portable Napoleonic Wargame as written - mainly because I want to see how they work on a ‘clean’ basis before I start tinkering with them. I have some ideas of how I would be tweaking them - also a few other ideas I have seen on the net - so using them as written may well alleviate the need for any amendments or additions.

For the purposes of this action I have needed to adjust how the units are actually represented as my basing is different to that suggested in the rules. I am using the following:

I will be removing individual figures to represent casualties but there are two caveats. The first hit a cavalry unit takes I will instead turn one of the figures around to face backwards. The second hit I will replace the movement tray with the single remaining figure. The Rifles will work in the same way.

The forces engaged represent small reinforced divisional sized formations. The French enjoy a superiority in artillery (2 guns to 1) and infantry (8 to 6) although the Allies also have 2 detachments of the famous 95th Rifles. Both sides have 3 units of cavalry - the French have 2 units of Cuirassiers and 1 of Dragoons whilst the Allies have 1 each of Hussars, Scot’s Greys and the Lifeguards.

The aim for each side was simple. They were to seize and hold the village against enemy action. 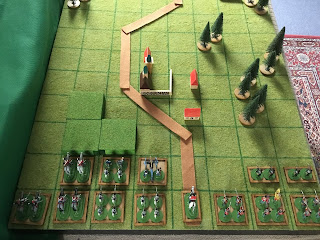 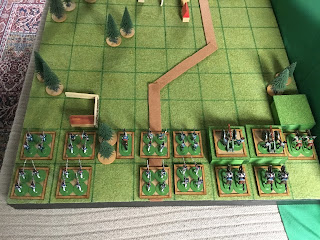 The French. The artillery has taken up position on the hill with the Cuirassiers to their rear and in reserve. The two brigades, each of 3 Line and a Light infantry unit, are deployed either side of the small copse next to the farm in the foreground.

In the early light of dawn General Hyde-Bowned was tired but relieved with the progress his small command had made since it was hurriedly ordered to break camp and march out into the night. His objective was to secure the small but strategically important village of Chimay. The orders, direct from the Duke himself, had arrived shortly before midnight and so a frantic, disorganised stumble across largely unfamiliar territory had resulted. The Duke had emphasised the need for urgency and had neither the time nor the inclination for lengthy explanations - “Dammit Sir, let my order be obeyed!” He testily admonished Hyde-Bowned when he queried a point of detail. With that he hurriedly set to work to get his command moving.

After a long night of endless marching, grumbling, stumbling and cursing, Hyde-Bowned finally stared out at the small and sleepy village of Chimay, his immediate objective, that of arriving before the French, achieved.

General Michel Enstarr had originally been given very similar orders to his soon-to-be opponent but a combination of order, counter order and and counter counter order coupled with the threat of a court martial and possibly a firing squad, had left him cursing the inefficiency of senior commanders and staff officers. It had never been like that when Berthier was around but he was dead.

His force finally got underway some four hours later than it should have but as the sun came up the small village of Chimay was thankfully on the horizon. Enstarr had no desire to fall foul of the Emperor.

The two sides arrived at more or less the same time but it was clear to both commanders that the Anglo-Dutch had the advantage. Enstarr immediately issued the requisite orders to commence the attack in the hope that he could secure the village before the cursed ‘Rosbiffs’ could settle in as he knew from his experiences in Spain that they would be very difficult to dislodge.

Hyde-Bowned saw the familiar blue columns in the distance and knew straightaway that he needed to act quickly or all was lost. With commendable speed he issued a flurry of commands to invest the village.

Both sides moved into their respective starting positions as hurried final preparations were made, weapons checked and last minute instructions issued. The grumbles of a missed hot meal and a lack of sleep were subsumed instead into thoughts of the deadly business at hand.

Having seen the Del Prado figures on your battlefield, I wonder if I ought to have mounted my figures on individual bases!

A very impressive collection, and I look forward to reading your battle report.

I must say that looks great and can't wait to see the action unfold. You've done a great job in getting everything ready in such a short amount of time!

I spent a lot of time thinking about the basing and was within an ace of going down the Portable Napoleonic basing route. I eventually opted for individual bases mainly as I was looking at other rules systems and also because of the figure selection I had.

Battle tomorrow all being well.

Many thanks old chap! I would have preferred to have used the hexed mat but this was easier to set up at present. It does look a little cramped but we will see how it plays out.

Looking good, David. Anxious to see the battle play out. I spend a lot of time trying to figure out which board I'm going to use 8-)

all the best,
Rick

That looks great Dave. I've been pondering what to do with my Napoleonic collection (a load of tatty old 6mm stuff, many decades old) and I'm actually thinking that I should start over with individually based 20mm. There are so many beautiful plastic figures now, and I do like painting plastic.

Thanks for the inspiration.

Hi David, as one who has imbibed my fair share of that Belgian loveliness over the years I'm looking forward to the battle. All looks very good. If I have one slight reserve it is simply that I think those wonderful figures would look better off of the sabot bases, but I can fully understand why you are using them. I just like the feel of moving individual soldiers but getting them on and off the table can be a bit of a pain.

All the best and enjoy the battle,

Good to hear from you old chap and I hope all is well with you!

It is a conundrum for sure what type of grid to use - not helped by some things appearing to better on squares than hexes!

The battle has been fought and the AAR will be appearing later.

I cut my wargaming teeth with plastic and if even half the choice available nowadays had been around ‘back in the day’ I suspect I would still be using them. 6mm has a lot going for it and there are some lovely figures around for the period - perhaps a refurb would ease the task somewhat?

The game looks nice and played out very well - the report will be in later all being well.

You are the first to point out the connection with the name of the village! Using the movement trays was a mistake for this action as they took up rather a lot of the 3” squared grid I was using. They do look better on a larger grid as they are not quite so intrusive.

I was very pleased with the overall look although would have preferred to have used 3 figure mounted units.

It was very much a lash in many ways but hugely enjoyable for all that as you will see.

What a lovely looking game David....
I really like look of it...

Many thanks old chap - much appreciated! It is very much a work in progress but it was really enjoyable getting some figures on the table top.