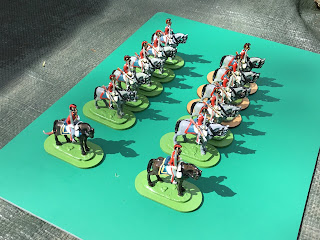 On parade and in the garden! The Del Prado Lifeguard figures before I get to work on them. The two separate figures are officers and the three with as yet unpainted bases are the new arrivals fromBob Cordery.

There has been a little bump on the road as far as painting figures is concerned as I have been involved in some 1:1 scale artwork in the shape of our downstairs cloakroom. Why is it that he smallest rooms prove to be the most problematic? We have had masking tape disasters, bubbling paintwork and various other minor but irritatingly time consuming problems. We are on the last of it though so I can get back into some real painting tomorrow. Spending hours in a cramped position with a 1” or 2” brush does not really inspire me to pick up something smaller at the end of the day!

The fellows you see in the ‘before’ shot are the Del Prado British Lifeguards which will be the first paint conversions from the collection I will be tackling. It is fair to say that these are probably best described as ‘based upon’ rather than historically accurate. Still, there is potential to make, if not a silk purse then at least a canvas shopping bag from the sow’s ear of a figures that comprises the rank and file trooper.

The plan is quite simple and I have listed the steps I shall be taking to spruce these up - and these are in no particular order.

1. The horses will be uniform black (with white in random places)
2. The saddlecloth will be painted in the correct regimental colour and to a similar standard to that of the original figure.
3. The small blanket roll will be painted in the correct colours
4. Six figures will have a new jacket colour of dark blue
5. When completed the figures will be gloss varnished and the bases matt.
6. Where possible the correct collar colour will be applied.
7. The two officer figures will have some additional work in respect of details of trim where possible.

To be honest there are parts of the figure that are going to be nigh on impossible to address without some extensive repainting and surgery. The biggest issue in this respect are the cross belts - I am not convinced they had these but in having them the front part of the tunic is effectively masked so there is precious little room for the yellow trim. I was toying with the idea of drafting in some plumes from somewhere to finish them off but would not know where to start looking for such. 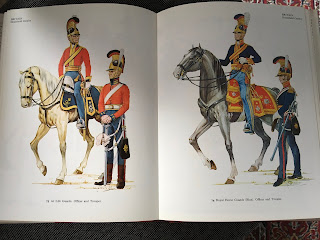 From Ugo Pericoli’s Uniforms at Waterloo. My Blues officer figure will unfortunately have similar horse furniture to his Lifeguard counterpart - no doubt he would sniffing disdainfully at the notion but sadly need must and all that!

When completed I will have two British Guard cavalry units they will look closer to the real thing than they currently do but they will still be ‘based upon’ rather than strictly accurate. This does not bother me as they are purely representational after all!

"Based On" works for me!

I had a BA - 6/10 Soviet armoured car based on a diecast fire tender and an Airfix Grant turret. Folk were amazed!! :-)