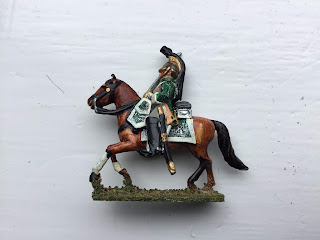 One of the troopers fresh off the base. It is really strange in that it is only the green that has given up the ghost - everything else is absolutely fine with the exception of some of the white trim. If my plan works these venerable warriors will once again see service on the tabletop. 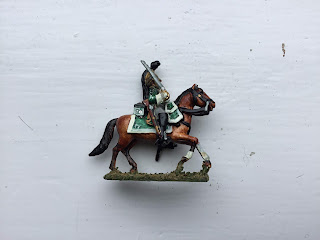 The reverse of the figure. I will not be adding regimental numbers as the unit will be representing any one of a number of units.

I mentioned in my last post that my next job will be the renovation of some old 25mm Minifigs French Napoleonic Dragoons that were painted way back in the late 1970s. There is a full sized unit of 20 figures including four command - two officers, a standard bearer and a trumpeter, two bearskin wearing elite troopers and fourteen other ranks. For my organisation this will be all the Dragoons I am likely to need. In the Command and Colours and Portable Wargame world units are typically of four figures whilst for anything else six or eight figures works well. For the unit I have the facing colours are pink meaning that they could be used for regiments numbered 13 to 18 (they have been numbered as the 17th).

The figures were originally painted using Humbrol enamels except for the horses which were done in oils. They were based in multiples on card which was then flocked.

My first task was take the figures off the old bases which was easily accomplished over a period of a week in my trusty soaking tray. I did this a while ago and the figures returned to the box in which they came before I made a start on them. Originally I planned to tackle these last of all as there is a fair amount of touching up and paint conversions to undertake with the Del Prado collection but following the arrival of the Chasseurs I decided that they needed to be dealt with sooner rather than later.

Now they are off the card the real work can begin so tidying up the underside of the figure bases before going on the new versions. This will also be useful as I will have something to hold onto whilst painting them. Before I get to that stage though several things have to be done. To begin with, I need to file around the figure base to remove the last of what looks like filler. Once this is done I will then get to work of getting off as much of the flock as I can.

At this point I am still a while away from actually painting anything but I hope to be there in a few days or so.

A careful examination of the figures reveal that the only problem areas are basically anything painted green - which on a French Napoleonic Dragoon is rather a lot! Mr Hardman, who originally painted these figures all those years ago, used the Humbrol Authenticolour French Dragoon Green (now Matt 101) which seems to have gone off in a big way. As you can see in the picture above it seems to reacted in some way and has both flaked and peeled away, in extreme cases taking the undercoat as well to reveal he bare metal underneath.

I have been thinking about the best steps to take with this part of the process especially in respect of the all important preparation. I would prefer not to strip the figures Back to the bare metal and start again because I believe I can salvage them. The green will not be a problem and I will also touch up the adjoining white - it will be delicate work but I reckon that as long as I take my time I will be able to do it. Besides, I need to get some figure painting practise in!

As a footnote to this I am reminded of the time back in the days of WRG 6th edition Ancients when I purchased a 25mm Carthaginian army from Mr Hardman - a real cross section of available figures ranges contained therein for sure - and had a similar issue of some figures that needed renovation and refurbishment. I never thought that some forty years later I would be doing something similar!