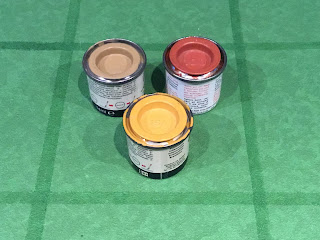 I am a mediocre painter and if truth be told I do not particularly enjoy doing it. I have often said that if it is organic then I will struggle to get the motivation to do anything with it - as the thousands of figures that have passed through my hands over the years will testify! After a hesitant start with the ACW ships I must confess that I have been enjoying wielding a brush and so making the leap onto figures once again is only a matter of time away. I have a small project in mind as part of my plan for some skirmish level stuff - so 28mm - and am even making tentative noises about tackling some Portable Wargame/DBA/HOTT sized forces so there is hope for me yet!

Most of my painting tends to be with enamels for which read Humbrol. I must have two or three hundred tins of the stuff going back to the Authenticolour days and in many cases still unopened. The same are perfectly fine when you open them but obviously one then needs to break up the pigment that has separated out from the oil and stir. Repeatedly and continuously. I use a bamboo skewer for this as cocktail sticks do not have sufficient strength to make any impression on the reluctant lump clinging to the  bottom of the tin like some kind of aquatic crustacean.

For the record I tend to use acrylics for undercoating and in the case of the ships, the masts and spars and some of the decking - in the recent batch the Confederate ironclads and the Union City class received Vallejo Buff on their decks.

I will not give too much away but the three tins pictured above - Humbrol Matt 94, 100 and 154 - have been brought back into service for something that I am working on at the moment. I will not give too much away other than to say that whilst it is not anything to do with the ACW it is relevant for a further two projects. My only crime is that I have embarked on this out of sequence.

I can hardly wait to see what you’ve done.

I can tell you that it will not be today! For reasons that will be obvious once unveiled it is not something that I can rush through although it has gone together surprisingly easily.

Always encouraged to find that there is still someone else out there who still paints with enamels!

I am not anti acrylic in anyway - it is just that I have so many enamels that replacing them on a like for like basis would not be cheap. I much prefer acrylic metallics to enamel - mainly due to several bad experiences involving supposedly dry metal colours ‘lifting’.

I feel comfortable using enamels - they know me and I know them!