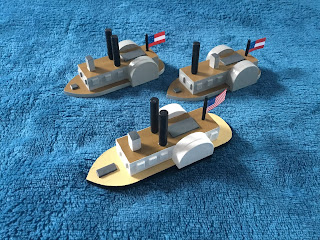 ‘I saw three ships come sailing in’ - Not quite Christmas and without a sail in sight these are the three latest additions to the ACW collection which now stands at 30 models.

Three more generic looking paddle steamers for the river part of the ACW project - two for the Confederates and one for the Union. Once again they are ‘based upon’ rather than any particular ship and can used as rams or gunboats as required. The Union vessel was painted with the U.S.S. Queen of the West in mind and so she looks rather striking in her white plumage.

I have deliberate kept the design of these quite simple but by moving pieces around am able to get quite a variety of model. The various tricks I have used are as follows:

One funnel or two

Number and position of gun ports

Number and position of deck hatches

Superstructure - this is a Jenga block and I have used full sized versions, 3/4 sized versions as well as angled front faced versions (both horizontally and vertical angles)

I have another five river based paddle steamers to build and then will look to build some ocean going types - I am thinking four at present. There will also be a coupe of stern wheelers to factor in as well.

All told I reckon I have around 15 or so more models to build for this project although it could possibly be more. There will be a brief break from the ACW as the next batch of models will need some components from my next Warbases order (currently in the queue). In the meantime though, work can resume on the Russo Turkish War so I shall be looking at them next.

Keeping on keeping on!

These models could easily be used for conflicts other than the ACW. They look quite similar in outline to the sort of river steamers used on the Danube and Rhine ... so might also find use alongside your Russo-Turkish War fleets.

Very nice David and it shows that with simple tweaks to layout, quite a different look to each model can be achieved. As Bob has said, I could see these being used in Europe, just by re-flagging to keep things simple.

That was exactly how I planned it with the paddle steamers. I wanted to get maximum versatility from a common design and it has certainly succeeded. Once the ocean going side wheelers are built it will dilute them further so a real mixture will be the end result.

Reflagging them is sadly not an option although it was one I considered at the outset. All the flags are glued in place but no matter - I can easily build a few more as required.

The humble Jenga block (the version from the Works) has proven to be a huge boon to my gaming - first the block armies and now a pivotal part of my ship building!

Amazing work, David ! A long way from simple blocks for wargaming 8-) Have loved each stage of the development of your ACW fleet

all the best,
Rick Krebs

Many thanks old chap! I still have the blocks and will be using them again - I have in mind a pimped up version - although when I get to that is another story.

I reckon I have another 15 or so models to go and that will be it done!

Next thing will be to think about how you are going to do stern wheels :)

One thing that struck me was that I was thinking about this all the wrong way. I have been looking at various cylinders etc BUT only three quarters of the wheel is actually visible so I need to think about that as well.

I will get to them at some point for sure!

What a fine looking flotilla! With such an inventory of naval units, there's all manner of campaigns and wars that might be fought - not all of them historical. In the back of my mind is a Latin American war between the United States of Amazonia vs the breakaway Confederated States of Anaconda - a cross between ACW, the Paraguayan War and the Nigerian Civil War...
Cheers,
Ion

Thank you old chap! I have really enjoyed building the paddle steamers (there will be more to come in the final batch of models) and for sure there is plenty of mileage for them - both historical or hysterical!