Thoughts on Madasahatta - Afloat and Ashore 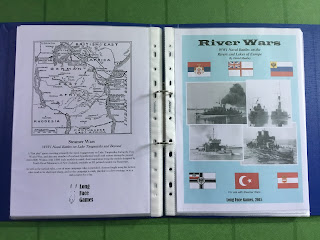 Fun and games along the Danube.... 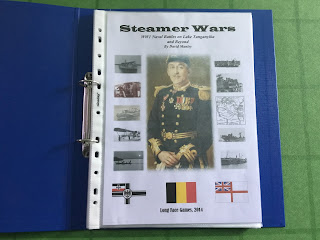 ....or across the vastness of Lake Tanganyika

I have much unfinished business as far as Madasahatta is concerned and events of recent days have served to remind me that it is an itch that will need scratching in a big way at some point! A while ago I made a start on some new (mis)adventures concerning the island set before the events of the famous WW1 campaign. I am looking at the latter years of the 19th century and it will be far more along the lines of being traditionally Colonial rather than a sideshow of the Great War.

My first thoughts are naval facing and what a veritable smorgasbord of warships I can choose from to equip the various navies! Working on the premise that any major power would want their biggest, best and newest ships close to home it follows that the navies of the colonies will have to make do with second line, obsolete or obsolescent ships - with the occasional flag showing of something up to date. This is a blank canvas for me as it means that all manner of ‘stuff’ can be built and used and I have to say that I am really looking forward to it at the appropriate time.

It will be a war of cruisers and of hastily requisitioned and converted civilian vessels with the odd arthritic battleship to overawe the locals and to ‘fly the flag’. Gunboats will also feature but for the most part the forces will be quite modest - no fleet actions here for sure!

From the land perspective I have absolutely no excuse for not raising some Portable Wargame sized forces based around my army maximum of 15 units. Bearing in mind that I will be using the 4, 3 and 2 standard (infantry, cavalry and artillery/mgs) for the units you can see just how small we are talking about - think DBA with the options! At this stage I have yet to decide on the figures of choice but I have to say that Jacklex are looking strong contenders at the moment. Having said that I may even look to my block armies with some model support where needed. That would certainly be a far easier option for me than painting figures! 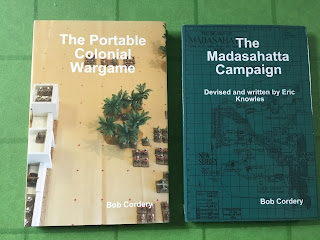 Both of the above will be required reading for what will be coming - not that much persuasion would be needed as both are excellent!

Unsurprisingly I have given a fair amount of thought to this part of the Madasahatta puzzle and so have more or less settled on what there will be ‘on station’ - at least as far as the main types if not the actual ships themselves are concerned. To expand a little on my comment above all of the major powers will have at least one ‘capital ship’. I should qualify this by saying that in each case it will be deemed to be the flagship but make no mistake - we are talking about second, possibly even third rate vessels, sufficient to make a show and keep the locals overawed. It would be contrary to the spirit of the times if the Royal Navy was anything less than pre eminent - in terms of numbers at least! The main fighting units will be cruisers of various types and again, these will be older or specially built Colonial types. At the lower end of the spectrum there will be gunboats and these I intend to be the real workhorses of the various contingents. There may be the odd torpedo boat but I have yet to make a decision about that. Much use will also be made of converted civilian ships as auxiliary cruisers or makeshift gunboats to supplement the naval forces as required.

At this stage I am thinking around 6 to 8 models per fleet of which there will be four - British, German, French and Turkish. Again some liberties may be taken as to when the ships were actually built/rebuilt - Messudieh I am looking at you! - but given that this is very much an ‘imagi-naval’ project it matters not!

To mix things up a little I also plan to allow the odd flag showing visit of something brand new and shiny for each of the fleets and naturally, such forces could feasibility be called upon should the diplomatic situation worsen or in the event of outright hostilities. Such is the almost Byzantine and labyrinth-like state of international relations on the island that anything is possible!

At the lower end of the scale  - the gunboat part if you like - my plan is to make use of the quite excellent set of rules produced by David Manley called Steamer Wars. The original rules were designed to enable gamers to refight the campaign on Lake Tanganyika during the Great War but thee have been expanded via a couple of supplements to include the wars on the European rivers - mainly the Danube - during the Great War as well as further supplement covering the Russian Civil War. All of these are available from the Wargames Vault under David Manley’s Long Face Games label. I hope he adds to this series as there is plenty of potential for similar scaled actions in other parts or the world!

The War on Land - Madasahatta 1900 style

The only decision I have taken for this part of the project is that I shall be using Bob Cordery’s Portable Colonial Wargame for the rules! In the event of me actually raising armies of figures for this then I shall be working to my 15 unit maximum per force or large sized DBA if you like. I really fancy making use of the Jacklex 20mm range as this covers most of what would be needed and the figures are quite old school and charming looking. In fact some of these were used in the original campaign fought way back in the late 1970’s so for sentimental and nostalgic reasons this option has a lot to commend it.

The lack of figures would not stop me gaming any land actions as the block armies stand ready to step in should the need arise although figures are my preferred choice for this.

To do Madasahatta justice represents a significant amount of work for me so it is unlikely to be fully realised on the tabletop much before next year. Having said that I am keen to make a start on the models at the very least I am aiming to do so at the start of the summer - say July or thereabouts. It is for this reason that I have been scouring my naval reference collection to get some ideas together for when the build commences. One thing is certain though - I am not doing any model making for it until the ACW and the Russo Turkish collections are complete.

I am really looking forward to it though!

I must admit that if I hadn’t recently found my ‘forgotten’ collection of 15mm Colonial figures, I’d be following your example and also opting for Jacklex figures for my future Colonial Wargaming,

It is a way off yet but I must confess to really liking the range Jacklex have - even more so now they have added German Colonial infantry! I dare say that ideas will come and go in between times but that is where I am at in my thinking at the moment.

I will also be using the larger unit sizes - 6 figure infantry, 4 figure cavalry - as they have a little more visual weight to them.

As ever, much to ponder!

This all sounds very interesting the sort of things to get one's creative juices flowing. As always I'm looking foward to updates etc on this project:)

There is a way to go before the fun starts but at this stage it certainly helps to make some provisional plans. I am about two thirds of the way through the ACW project (some more models will be appearing tomorrow) and then it will be the smaller Russo Turkish set up. I reckon I will be making a start in the summer.

I am looking forward to it for sure!

Hi David -
Methinks Jacko and I might have to rattle our dags and get a move on, or you'll be stealing a march on us! We have a number of ideas in train, one of them a kind of 'Boxer Rebellion' type of siege against an international force, plus a couple of 'expeditions into the interior' type of campaign. I'm tossing up whether to do this as a 'Snakes and Ladders' campaign, or something more along the lines of Bob Cordery's 'Colonial' campaign.

This will be on hold for a little while whilst we refresh ourselves with a WW2 Command Decision action...
Cheers,
Ion

To be honest Madasahatta has been lurking in the wings for nigh on 40 years so a few more months will hardly matter in the great scheme of things. I have a lot of work to do before I even get to it and given that I shall probably be back in the office full time from June - fully jabbed thankfully still in a job - it will take me longer to get it going.

I think your dags will probably not need rattling - just a gentle nudge should do it!

I am going full on Portable Colonial Wargame when i do get to it though and funny you should mention about ‘expeditions into the interior’....

BTW, I pinged you a message via Messenger.