My order from Warbases arrived this morning so I now have all the remaining pieces I need to complete the ACW collection. I have identified the models I want to build so now it is just a case of getting them built! The collection when complete will consist of 52 models and given that is near enough six months again that I started this effort means that an average of two models a week is not too bad at all. First I have to build them though and more by chance than design there are only three ships that will need masts!

The first ships I am building are very much river facing rather than coastal and there will models for both sides. For the most part the advantage will be the Union in terms of the models remaining - in fact two thirds of them will be for the North. 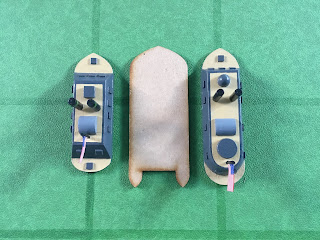 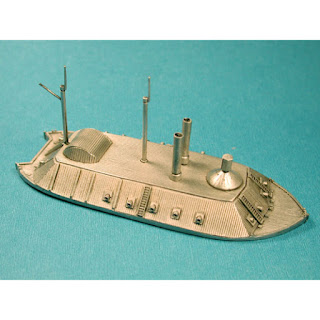 This is the Thoroughbred Models 1:600th scale version of the U.S.S. Benton - mine will feature straight, angled sides and ‘purely representational’ levels of detail.... 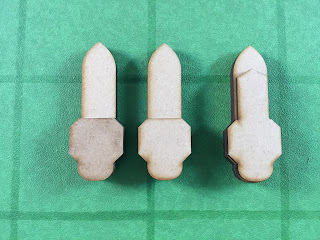 The above three are for the U.S.S. Tyler, U.S.S. Conestega and the U.S.S, Lexington - stalwarts of the Union river fleet. 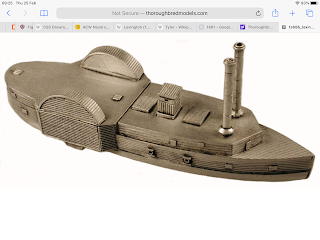 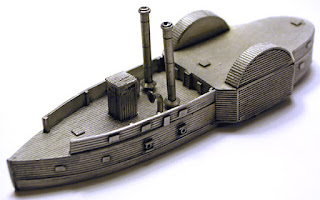 Aside from the above I have a selection of paddle steamers to build - no stern wheelers as yet although I may add a few in time - and then it will the last of the coastal bits and pieces.

One of things that has been an absolute godsend in terms of information although I only came across it a couple of days ago is the book you see before you available from the Wargames Vault. 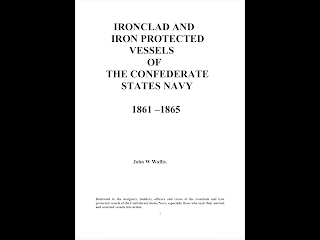 Everything you wanted to know about Confederate armoured warships but were afraid to ask!

John Wallis, the author of the above has not only written a peach of a book he is also a thoroughly nice chap into the bargain! The book covers the design and development of every armoured warship the Confederacy used complete with scale plans as far as known, a state by state summary of the types designed, ordered, built, abandoned or turned into something else. Even foreign orders feature. I cannot recommend this book highly enough to anyone that has an interest in the warships of the American Civil War and as an aside if anyone is thinking of an ACW 1866 style set up (in the same vein as a WW2 1946 affair) then this would be very useful indeed!

A quick glance through the pages (sadly it is only available online and at over 230 pages is a big printing job) has given me a lot of comfort around my ‘generic’ looking models - the chances are that all of them featured in one form or another - either as designs or early versions of existing, known types - so it is good to know that I am not that far off the historical base!

It looks as if you have a busy few days ahead of you!

The USS BENTON looks as if it is going to be a big beast!

The Rayleigh ship yard will be in full swing for the next couple of weeks for sure!

The U.S.S. Benton is a beast and a half but I simply had to have one! She will operate alongside the two city class gunboats - the U.S.S. Carondelet and the U.S.S. Louisville - and the U.S.S. Essex.

Two models a week on average is very good going and 52 models is very impressive! I suppose you could use a deck of cards to decide upon random fleets selection if you should so wish.

The ship yard has certainly been busy...
I look forward to seeing the new ships launched...

You have been an extremely busy boy!

It has certainly been an endeavour and no mistake!

That is a novel idea! I will give that some thought but first I need to get the models tackled.

All being well the first of them should be appearing in a few days. Ideally I want the lot completed by the middle of April.

Amazing work David. The Thoroughbred models are luscious, no doubt, but yours are very impressive and would grace any gaming table.
Cheers,
Michael

Thoroughbred are lovely for sure but getting them in the UK would be hugely expensive. Originally I did consider using Peter Pig for the project but decided that I wanted to build the fleets myself. They are simple, old school models and are largely ‘based upon’ rather than being strictly accurate but I do not recall in the forty odd years I have been wargaming having as much enjoyment as I have had building these!

They may not win any prizes but they fights just as well!