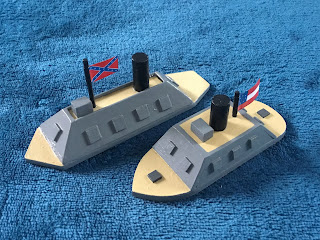 The final version of the C.S.S. Georgia and a small, generic casemate ironclad. I have a similar small octagonal casemate ironclad to build and then one final model of the type for the Confederates for the ‘big finish’.

Following on from last post and the struggle I had building an octagonal casemate ironclad I took the opportunity to step back into my comfort zone to crack on with some of the easier elements of the ‘loose ends’ section of the building programme. I needed to rebase the C.S.S. Georgia, build a further two smaller casemate ironclads - one conventional shaped and one octagonal - and then tackle three floating batteries - the decommissioned old style models.

Well, I have tackled the C.S.S. Georgia and the smaller conventional ironclad you see above and am pleased that I did! The C.S.S. Georgia will only ever be used as a floating battery but historically in this capacity she certainly gave the Union pause for thought. She is pretty imposing looking and to be honest I wish I had built her to this size and standard to start with. I have rather a soft spot for her and after having watched a very good documentary about her on YouTube even more so.

Once the smaller octagonal casemate ironclad has been built I shall have room for one more for the Confederate cause and am currently looking at either the Virginia or, more likely, the Tennessee.

The final batch of models for the Confederates will include some more side wheelers, a commerce raider, a blockade runner and some gunboats and as soon as my order from Warbases is in I can crack on with them.

For the ACW ship building project there is a definite end in sight!

You are certainly getting a nice collection of ships David...

Very nice David and the CSS Georgia looks fine to me:)

Many thanks old chap! When finished the ACW collection will be just short of 50 models although I may build something to get it to that figure!

Thanks old chap - much appreciated! It has taken me three attempts but I reckon that the C.S.S, Georgia is now where I want her to be.