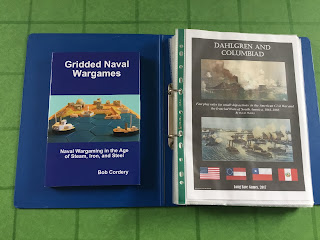 I have drafted a set that have worked quite nicely by taking elements from Bob Cordery’s ACW set published in his book Gridded Naval Wargames and also Dahlgren and Colombiad published by David Manley. Both of these worthies have been unstinting in their support and encouragement of my efforts which has been hugely appreciated. There is something though, that does not feel quite right about my set. It is nothing I can put my finger on specifically, it is more like that nagging feeling that something is missing. The best analogy I can think of is the Chinese take away that hits the spot when you eat it but for some inexplicable reason half an hour after you have finished it you are reaching for the toaster feeling hungry again!

I mentioned several posts ago that the rules needed a rewrite and if I am honest this seems to have made matters worse. Even parking them out os sight for a few days did not seem to help - there was still that feeling nagging away.

I think I now know what the problem is. I have been looking at my rules from the wrong direction. What I have done is to take elements of both sets and then effectively glued them together more or less as they are. What I have not done is to set out what I wanted to achieve with the rules from ground up. The fact that my improvisation has worked at all is testimony to the skill of both Bob and David as rule writers par excellence - it would be very difficult to ‘break’ either set. I suspect that I am not articulating this particularly well but it makes sense to me.

What I am going to do is to go back to the beginning and set out exactly what I want from the rules I am designing and then see what fits where in the manner I am aiming for. This will not be a slavish bolting together of various rules - it will be a proper dovetailed joint of an idea! This probably seems like a lot of work but in actual fact it is not as much of the groundwork has been laid already. So in a sense whilst I have gone down a snake there is a rather handy ladder nearby!

On the subject of Snakes and Ladders there has been a number of posts within the blogosphere about using the idea of this venerable board game as the basis for a campaign. I think this is a spiffing idea and naturally, given my current naval diversion, I thought about how this concept could be used for naval games. The short answer is of course it can but I need to sit down and think about the whys and wherefores but it will come as no surprise when I say that I already have a number of ideas to pay around with! 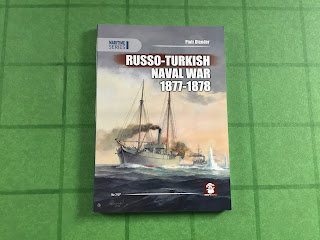 This is a magnificent read  - as are the other titles in the series although I am limited to just the Pacific War volume. My only criticism is that it is not available in hardback!

I must confess that my enthusiasm for the naval dimension of this particular war was cooling - another snake - in favour of diving into Madasahatta but the above book - another ladder - has certainly restored it!

The Russian Black Sea fleet was virtually non existent following the Crimean War and indeed, for the war with Turkey they had nothing that could meet the Turkish ironclads on anything like an equal footing. Much use was made of armed civilian steamers but these could not be expected to take on an ironclad. The Russians were nothing if not inventive in that fitted out certain ships with large calibre mortars mounted aft in the hope that the Turks would pursue them. Due to the high angle fo trajectory a mortar shell could certainly go through a lightly armoured or unprotected deck to wreak havoc in a ship’s vitals.  It was using a shore based version in this fashion that the Turks lost one of their Danube river monitors. Attempting to try this tactic out led to the famous fight between the Russian steamer Vesta and the Turkish ironclad Feth-i Bulend. For the most part the Russian Black Sea steamers were used to harry Turkish communications and attempt to draw off the Turkish ironclads from shore bombardments etc.

The Russians made extensive use of mines and torpedoes - both spar and even some locomotive versions -  and, together with the army, were able to take the initiative along the Danube despite being materially outnumbered. The Russians even made use of a couple of captured Turkish river casemate gunboats that had been sunk, refloated and repaired and incorporated into the Russian navy.

One of the Turkish plans in the Black Sea Caucasus region was to persuade the largely Moslem population of such places as Chechnya to rise up against the Russians, thereby requiring troops to be diverted from the Balkan front. Landings were made to supply such insurgents with weapons and indeed, even Turkish troops were deployed in support but the movement never really got going apart from some sporadic looting. The main bulk of the Turkish fleet supported such operations.

This is a very brief overview of the naval dimension of the war - the book above is an absolute gem if you wanted to explore the period further - and it has given me plenty of ideas for gaming purposes.

Essentially you have the weaker navy being far more aggressive and landing some telling blows due to flexibility and technical innovation against a much larger, better equipped but far more passive opponent.

That will certainly make for some interesting and tactically challenging games.

Hi David -
One feels, you know, that it is probably just as well for the world that Russia's access to the sea has historically been problematic as well as problematical.

The Russo-Turkish 1877 naval operations sound like an unusual and, dare I say it? - romantic topic for a campaign.
Cheers,
Ion

There are some cracking ideas for some games contained therein - and with two sides that are so widely apart in terms of material it will make for some great tactical challenges.