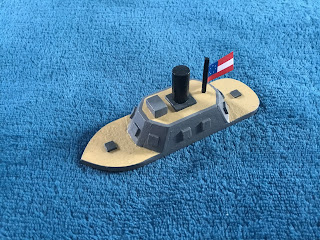 For a variety of reasons I was very glad to see the back of building this particular model! She has scrubbed up quite well although she came very close to being thrown across the man cave on more than one occasion....

My building technique for the ships comprising the ACW collection is a tribute to the power of the straight line. My ship hulls are invariably straight sided and the only curves to be seen are usually at the bow and the stern. Straight sides, however unrealistic they may be makes modelling infinitely simpler and so pretty much all of my casemate style ironclads have a very box like demeanour. The U.S.S Essex has a curved rear portion whilst the C.S.S. Manassas has a curve to her hull but other than that all of mine are angled on the front, rear and sides for sure but ramrod straight with it.

The Confederates built a number of casemate ironclads sporting an octagonal casemate. I do not know the full reasoning behind this other than the fact it saved raw materials in the build - for much the same reason as some of their later ironclads sported quite small, almost box like casemates. With this in mind I decided to build a larger octagonal casemate ironclad and a smaller version. This also ties in with the decision I have made concerning some of the other Confederate ironclads I have built - the C.S.S Georgia and the two smaller models.

Before I go into the octagonal ironclads in detail I will tell you what I am planning to do with the aforementioned trio of models. I am going to rebase the floating battery version of the C.S.S. Georgia and dispense with the full hull version. I am also going to retire the two smaller ironclads. These were amongst the first models I built and to be honest I have improved my construction technique to the point that they now look a little out of place. I will still have a use for them though as they will be used as floating batteries - I will simple take the casemate off the hull.

The octagonal casemate was an absolute git to build! I came very close to just abandoning the idea as a bad job because no matter what I did it seemed to go wrong. Matching up the angles of the casemate was a vexing experience for sure and no matter how I tried I could not get the front and rear face to sit straight!

After much cursing, filing, gluing and more cursing, filing and gluing - did I mention filing? -  I managed to get her assembled but the problems did not end there. For some reason I seemed to develop an acute case of ‘not being able to stick anything on to where it was supposed to go’ so gun ports, hatch covers, the funnel and flagstaff all needed positioning and then repositioning as they were wrong in the first place - all very tedious and very depressing.

I got there in the end and it was worth the effort but it was a torturous process - building three masted ships is a doddle by comparison and I still have one more octagonal casemate to build....

Sorry to hear you struggled David. For me this sort of stuff is second nature due to my former job, which you probably don't want to hear! If you want any advice, just send me a mail and I can give you some ideas how to go about this.

It looks as if all you efforts were worth it. I think that the end result looks impressive, and I’m sure that she will perform well in combat.

Looking over it all I think the key mistakes were not measuring accurately enough, rushing and trying to do too many things at once - all in all a recipe for potential disaster! In truth I am not a ‘scientific’ modeller and I suspect that if you were to see me at work you would probably wince!

I got there in end but many thanks for your offer of help - I will drop you an email tomorrow - once I have gotten my head straight and free of octagons!

Thank you old chap! I am pleased with how she turned out but I hope the next one is a whole lot less wearing to build! After the grief I went through with the build I hope she is veritable tiger on the table top!

Cursing, fileing, glueing.....an all to familier sound in Casa Rousell!

The final product looks good to me, well worth someone else's labour and frustration.:)

(but then I struggle with rectangles)

I am glad I am not the only one!

I was so relieved to actually paint the thing as it covers a multitude of modelling sins! I only hope that she goes on to have a long and distinguished table top battle record.

For the record I am OK with rectangles but squares present a whole new set of challenges - I can build a square but drawing and cutting one out is a frustrating experience for sure!

Hi David -
It's one of this finished products in which one can see the sort of complications one encounters, and yet the end product looks fine.

You question the purpose of the 'octagonal' superstructure. I suspect that this would have been due to the forward and after guns being pivot mounted. That little fellow could almost carry but two guns, one fore and one aft, shooting out of one of 5 ports! Actually, I'm supposing that it will carry 6 guns, one fore and aft firing out of one of the 3 fore and aft ports respectively, and 2 fixed mount guns in each broadside.
Cheers,
Ion

Many thanks old chap! The pivot gun idea was certainly used and I reckon that three factors may have been in play here - shortage of suitable artillery, shortage of raw material and also a shortage of manpower - less guns require fewer crew so using what was available efficiently would mean that pivot mounted guns would certainly be attractive.

I having been looking at he model with a critical eye and whilst I am happy with the casemate the hull is a little battle scarred due to collateral damage from the brutal amount of filing required. I may replace the hull at some point to something a little less tatty!