Taking Stock of the Blocks 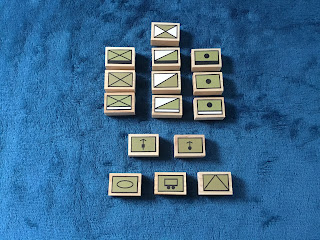 One of the seven colours of block army I made showing all the current troop types available - the other colours being red, blue, green, light grey, khaki and a mixed set for tribal irregular types. At the top is a command block and the next three rows are of infantry, cavalry and artillery with the black band being fro heavy and the white for light versions. The next two are a machine gun and mortar whilst the bottom row is of a tank, a truck and an anti tank gun 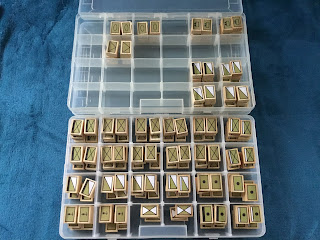 Two of the twelve boxes

It has been a while since I did anything block related despite having a few developmental ideas currently simmering away. As I write this I can see the dozen boxes of the block collection - this does not include the Command and Colours types - and can remember the frenzied round of games I fought using them with a sense of pride and of enjoyment. I had a lot of fun with these despite their limitations - which was as much to do with how I made them as anything else.

As part of my ‘to do’ list for this year I want to ‘pimp’ the block collection in a number of ways so as to improve the overall look and increase the visual appeal. The wags amongst you will no doubt say the best way to pimp a block based army is to buy the appropriate figures for the army in question and get painting! That would be far too logical for a man of my somewhat eclectic tastes in table top finery!

The block armies worked best for straightforward army types - the archetypical horse, foot and guns of the horse and musket period. The troop formations operated in blocks, the maps of the battles used blocks so it all works rather well. Where is falls down is when you are trying to represent army types that have a larger variety of troop types operating at a tactical level - this level is after all where most table top battles are fought.

Taking WW2 as an example I want my armies to feature separate machine guns, mortars, anti tank guns, tanks, trucks, APCs and so on. With the best will in the world a labelled block does not really convey the right impression at the tactical level. I may be block-fixated but aesthetics are still important!

Similarly for the pre gunpowder period where you have a plethora of infantry types from light javelin armed skirmishing infantry up to pike blocks via tribal warriors, roman legionaries, Greek hoplites to fully armoured Knights, horse archers and so on - the blocks as I have made them struggle to differentiate between types.

My block collection can differentiate between the notional ‘weight’ of types - heavy, line and light - which is fine for the Horse and Musket era but is a little anonymous for everything else.

I have been thinking about this whole subject quite a bit and have come with an idea that will not only address the additional troop types but will also add to the aesthetic appeal of the exiting block types as well as enabling me to explore something rather more novel. I am still drafting the appropriate designs and so will share these once they are ready but suffice it to say that painting will be involved (there, you see, I am a proper wargamer....) as well as Warbases and the inevitable lashings of MDF....

Those blocks look great with the labels and completely agree that they work best with the Horse & Musket era. I have toyed with adding flags to mine, but in the end left them plain for ease of storage more than anything else. I look forward to see your plans to pimp your blocks!

They were a labour of love I can tell you and there are a load of battle reports on the blog using them! For me the jury is out over flags - I have some but am not entirely sure about the best way to use them.

The planned ‘pimping’ really concerns the 20th century set up although I have also been thinking about applying it to the pre gunpowder period for a change. I am still working on the details but hope to have some news to share about the idea soon.