Dotting the Skies and Crossing the T’s 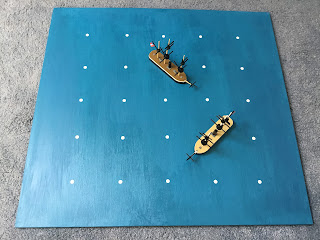 Now a 6 x 6 board but with ships occupying two squares rather than one so would still work for 3 x 3 style games - probably better than using the original 8” square grid. Note the ‘T’ being crossed…. 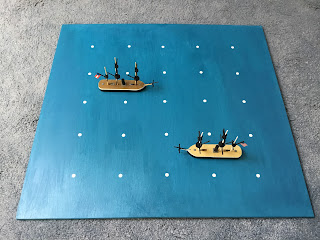 OK I know it is not really a board for use in aerial games - I will be doing so though - but as a small footprint playing area it has stood me in good stead! Following on from the decision to revert to using two squares per model rather than one I took the opportunity this afternoon to add the additional dots to the board. Now it is not perfect by any means but this is really test bed until I organise something a little more permanent. The ships on the board are of course the two sloops I refurbished earlier in the week and are there just so you can see how it looks.

Whilst the majority of the collection resides in the man cave I took the decision to organise some bits and pieces that I could tackle in the lounge at my temporary work station. Just a tray full of bits and pieces as I have a mast and spar building session planned. The three ships you see will be replicated so I needed to measure the masts and spars and get them assembled as these will be the next batch of models after the ones I am currently painting are finished. 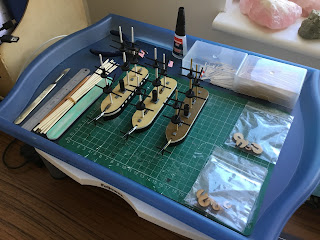 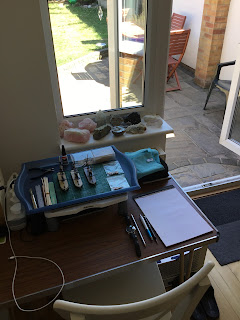 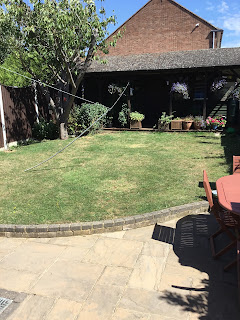 The view from the patio doors. If you look closely you might see one of the cats - clue: they are black and white!
Not shown here but also dragged out of the man cave my copy of Dahlgren and Colombiad and By Sea and By Water so that I can make a start on the new ship specification charts.
All in all then, not a bad way to spend a couple of hours on a Sunday.

Like you, I’ve tried to work in my normal war/toy room and home office, but I was driven out by the heat and set up my laptop in our dining room. It’s cool and dark in there … and enjoys a through draught that keeps the room relatively cool.

As a result, I’ve done little painting but have been working on my version of the CAMPAIGN map. (I thought that they were finished and then realised that I’d missed out Stettin. A corrected version of the maps will be published on my blog tomorrow.)

The model ships look better on the 6 x 6 grid, and I think that going back to that size of grid was a very good idea.

I could have spent some time painting but I knew that in the heat it would have been a frustrating experience. Building masts is still taking things forward though and so is a welcome alternative - especially as the lounge is cooler!

I thought long and hard about the two square idea and am really pleased that I reverted back to it. Seeing how the board came out served to reinforce the decision!

It’s always interesting to see and read your thoughts and progress on this project…
Your work station is way more tidy than anything I have 😁.

Thak you old chap! This is the work, work station - the 5ft by 3ft desk of doom in the man cave is rather less well organised….