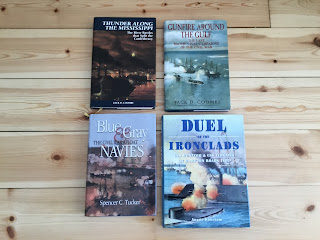 Four of the most useful titles in my library for the ACW project. Battles and Leaders is also very helpful as is Mahan’s Gulf and Inland Waters. There is also the Gibbons title for plenty of eye candy.

As anyone that knows me will undoubtedly testify, I usually have a rather short attention span when it comes to the majority of my gaming endeavours. The one thing recently that I have persevered with and for far longer than I would have expected is of course the ACW naval project. For sure I have had the occasional dip in effort - real life has seen to that - but I have always come back to it, if not with renewed vigour then certainly with  a very definite idea of what comes next. I think in many ways this project has evolved and developed by accident and I believe that because of this it is why I have stayed with it for so long. 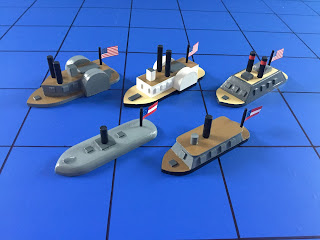 A lot of paint and MDF has been expended since this picture was taken! U.S.S. Carondelet (top right) is earmarked for a minor refurbishment - the pilot house is going to be replaced with an octagonal version and the funnel bands will be repainted.

When I first set out on the project it was only ever going to be around a dozen or so models and would be using a variant of Bob Cordery’s ACW rules found in his excellent book Gridded Naval Wargames. Writing my own rules would come rather later.

What changed? Well, to begin with, the associated research I was undertaking was pretty inspiring and so I soon found myself looking at specific vessels - which in turn extended the building program so as to include them. I suppose that makes me guilty of the heinous sin of project creep!

It didn’t stop there as inevitably my horizons expanded beyond the campaigns along the rivers so as to include coastal areas and the high seas. These were never part of the original plan so again, a degree of escalation ensued. As an aside, building fully masted ship models for the ACW has given me the confidence and techniques to tackle some age of sail gaming at a later date - a surprise to be sure, but a welcome one (no prizes for guessing which film that quote came from….)

The building continued until I reached the point - I think I had three dozen models ready at the time - where I wanted a set of rules that would better enable me to model the unique attributes of specific ships. It was at that point that it all became a rather more serious undertaking than merely cobbling together a handful of generic looking models!

Since then work has continued apace and the models are again being built (and indeed some will be replaced) and the rules are pretty close to where I want them to be. I have needed to resist the urge on occasion to ‘tinker’ with them though!

I have had some wobbles along the way - not so much with the overall direction of the project, more to do with the occasional sticking point during production as well as real life dramas - but then have consciously made a determined effort to press on.

So here we are, nearly two years on, with a collection when complete of some seventy scratch built model ships, a set of rules, some terrain pieces and a custom built playing area.

According to Google Translate ‘Schwerpunkt’ means ‘Main Emphasis’ and as you probably know historically it was a term used by the German army to indicate the point of maximum effort of a military operation, typically used when discussing the finer points of Blitzkreig. It assumes that all resources and effort are applied at the point of contact - the tip of the spear if you prefer - when engaging the enemy. In this case I used the term to best describe my approach to the ACW project and how the scope and scale evolved over time - call it a form of tactical flexibility if you like - but crucially stayed ‘pointing in the same overall direction’ as at the outset.

If I sound rather pleased with myself with this project and the progress thus far then I offer no apologies because by and large I am. It has been enormously satisfying in respect of the modelling, the gaming and the writing about it but most of all I have proven to myself that I can take something on of this  magnitude and be able to stay the course to see it through - this after years of stopping and starting a myriad of projects. Had I planned something of this size from the outset it may well have been a different story but I like to think that by persevering with this project I have taken my first steps into a wider universe, simply because I have proven to myself that I can do it!

Some of the more ambitious projects I mentioned in my previous post will certainly not be started with a view to having everything from the outset. Take Madasahatta 1891 for example. Yes I plan to have a number of Portable Wargame sized armies and the associated naval support BUT, and this is the key thing, I fully intend to tackle it in bite sized chunks which will serve two purposes. Firstly, it will enable me to ‘silo’ those parts I am tackling until completion and secondly, it will enable me to maintain the enthusiasm required as I move between the various strands making up the overall project. I was able to do this with the ACW project as the overall set up is made up of separate but linked strands - river based vessels, those that served at sea and on the rivers and finally the blue water element. Add in the rules and terrain considerations and you can see that there was enough diversity to maintain the  enthusiasm - which was crucial for me!

We all have our own way of working and so what is good for one may be less so for someone else. For me the key thing is to have an overall ‘big picture’ but with numerous self contained chapters that can be tackled independently if required. That has been the key lesson I have taken from the ACW project.

Yes, I must admit to being in awe of the expanding scope of your ACW project and the tenacity that you exhibited in bring the project to this (near) conclusion. Good show:)

It has been a longer road than I envisaged but a worthwhile one all the same. I have learned an awful lot of stuff along the way that will stand me in good stead in the future. Most of all though I have learned what I can do and how best I can do it!