Two Sloops or the Sloop of the Day 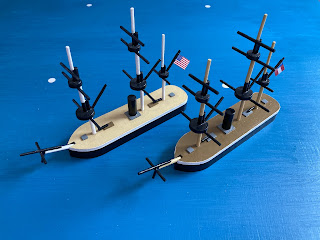 Refreshed and ready to take to the high seas once more - a pair of modern sloops, previously used as the  U.S.S. Kearsage and the C.S.S. Alabama

Whilst the five ACW ships currently being painted are waiting patiently for some TLC I pressed ahead with the paint refurbishment of a pair of sloops. The two models above have seen service when I refought the Kearsage/Alabama action. The only difference is my version of the white edging commonly applied to the top of the hull. I think it looks rather smart although is probably a little on the thick side.

As mentioned previously, my usual method for painting this type of effect is to paint around the edge of the layer of MDF before assembly. This ensures a really sharp finish. To achieve the above after assembly meant breaking out my trusty roll of Tamiya Masking tape. I have no idea how long I have owned this but I remember buying from Beatties the model shop when it was in High Holborn and pre Model Zone! It still works a treat though and I have loads of it left.

Once the temperature has dropped a little - the man cave is rather warm at present, even with the windows open - I shall get the other five attended to as well as starting a great mast building exercise for the remaining frigate and another pair of sloops.

It is good to moving forwards again though!

They look good! Now excuse the pedantry but I have specialist knowledge :it was Beatties on Holborn. Beanies was in Sittingbourne, near the camera shop you worked in!

Many thanks old chap and yes, you are absolutely right about the names - I have amended them and consider myself to have been duly admonished! Beanies and Man and Boy as I recall, at opposite ends of Sittingbourne High Street!

Beatties or Beanies - both had plenty of money off me in back in the day….

All the best and thank you for the gentle reminder,

Thank you old chap! I was pleased to get these two paint refurbed and they look better for it. They also served to give my painting arm a bit of exercise which is no bad thing - on with the rest!

Took me a while to get the Mrs Overall reference. very good! :-D

It was a classic sketch for sure! I very nearly added the YouTube link….

Always a joy to see your marvellous ships. The prospect of more to come; fabulous!
Regards, James

Many thanks old chap! I was glad that I added the white strip albeit it being rather thicker than it should be - it still sets them off though.

More to come for sure!

Hope all is well with you!

They have spruced up nicely David…
I like the thickness of the white stripe…it fits with the style of the models.

I must admit that I had my reservations to begin with but they have grown on me. I am pleased I did it as it had been niggling away at me for some time so it was a welcome scratch to the itch so to speak.

There will be a few more over the weekend all being well.