“The Dreamers of the Day….” 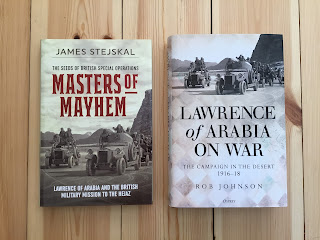 So today is scheduled to be the hottest on record and with a Red weather warning to boot. I have some spare time today but suspect that the man cave may well be out. So what does one do whilst trying to keep cool? I shall probably catch up on some reading and so one of the two titles you see above will be the choice for today.

Reading about the campaigns of Lawrence in the desert whilst the country bakes in circa. 40 degree heat - I have previous form for this only the last time it was Seven Pillars of Wisdom - may be considered by some to be mildly eccentric but I like to think of it as method reading….

I have had a hankering to game something Arab Revolt based for sometime although it is not currently on the radar, at least not in the Lawrentian sense - Arabs will of course appear in Madasahatta but these are not going to be nomadic Bedouin types though. Having said that it might make sense to use Bedouin style Arabs as there would be more flexibility with them. Something to think about anyway.

The title of this post comes from a quote from the Seven Pillars of Wisdom: A Triumph by T.E. Lawrence as follows:

“All men dream: but not equally. Those who dream by night in the dusty recesses of their minds wake up in the day to find it was vanity, but the dreamers of the day are dangerous men, for they may act their dreams with open eyes, to make it possible.”

That could be describing a wargamer in many ways, especially when contemplating yet another new project!

I recently read Lawrence of Arabia on War. It’s pretty good, but there were other officers both British and French who were possibly just as effective as Lawrence. It’s just he got made into the ‘hero’ by the press, newsreel and a post war documentary film.

A theatre of WWI that is always appealing, alongside the East African campaign. Too many other projects on the go as it is, but never say never! As for the heat, I used to play cricket in Nigeria during the hot season, so temps similar to those forecast and due to being acclimatised, didn't really find it too hot, as long as you kept well hydrated. I couldn't do it now at my age, that's for sure.

Absolutely - Lawrence was one of many but became the ‘poster boy’ of the piece. A complex man for sure but what a life he led. I must admit to being a bit of a Lawrence admirer although he was not without his faults.

It is a really enjoyable read - dangerously inspiring!

Arabia and East Africa - not forgetting the Senussi Revolt in North Africa - are all interests that will need to explored in more detail at some point. I must have seen Lawrence of Arabia a fair few times - one of my all time favourites despite the historical howlers contained therein. Antony Quinn was outstanding as a ‘River to my people’!

Cricket in Nigeria during the hot season? Wow, that is hardcore - as I suspect so were the pitches!