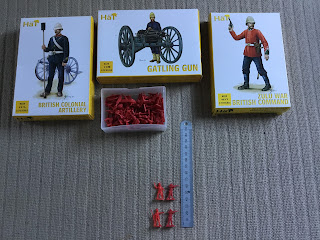 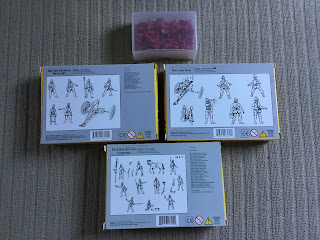 The rear of the boxes showing poses and construction where appropriate. The small box contains the ‘red’ contingent from the board game sans the gun model.

As mentioned previously I had decided to source some extra figures to go with the pose available from the War in the Age of Imperialism board game. It is safe to say that for those gamers that choose to use 1:72nd  scale plastic figures - either by chance (in my case) or by design - enjoy an availability of such that is a quantum leap from what is was way back when I first started out in the hobby! One of the most prominent companies producing plastic figures is Hat Industries and so it was to them that I first turned for some additional bits and pieces.

I had checked out the figures on the really useful Plastic Soldier Review website so I had a pretty good idea of what I was getting in terms of how they looked but until I could physically place one of them alongside the standing firing infantry figure that was gong to be the rank and file for my planned forces I simply had no clue as to how they would look together. 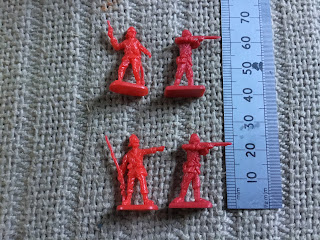 The acid test. On the left are a brace of Hat British commanders and on the right are the infantry from the board game with the ruler to illustrate the respective heights.

As I expected the Hat figures are obviously far more detailed and anatomically better built (probably not on a diet of ‘Horse meat in axle grease’ as served to the rank and file….) but height wise are not too far apart, certainly not enough to cause any difficulties that is.  The infantryman is scrawny by comparison with the command figure and has a noticeably smaller head and a shorter firearm although in the case of the latter the bayonet is not fixed. As the infantry will be on multiple figure bases and the number of command figures will be limited it should not be too much of a visual issue.

Artillery (including the rather splendid Gatling Gun) does not present any such problem as there are no gun crew contained in the board game - there is a nice engineer figure though - and in any event are usually ‘distanced’ from the infantry.

For cavalry I shall be using exclusively the figures from the board game - there is one with a sabre and one with a carbine - although Hat do produce a Zulu War lancer. Given the small number of mounted figures I envisage for the set up it would be difficult to justify buying a box of lancers - which undoubtedly means I will do at some point! I did note from the Plastic Soldier Review website that a box of Chasseurs D’Afrique are available which would be very difficult for me to resist for the French force!

I will be able to use the full range of Hat (and others) Colonial figures for the various opposition types but for now have more than sufficient to build the main bulk of the European contingents.

Summing it all up

Overall I can live with the discrepancies between the Hat figures and those from the board game and so I am hoping that once they have been painted the differences will be less obvious to the eye - especially when in the heat of battle. This will be a while away though as the ACW need finishing and in truth, there is probably more likelihood of the naval component of this project seeing the light of day first but we shall see.

I think once they are on the table, based and painted up, any differences will be largely unnoticeable. The Plastic Soldier Review website ia a great but dangeroud trip down memory lane for those of us of a certain age!

That was my feeling exactly. I remember reading in White Dwarf years and years ago when they launched their very first hard plastic fantasy figures that their idea was to use the relatively crude plastics (new technology and all that) for rank and file types and the better quality and more detailed figures for command and personality types. I suppose that is the way I am looking at this set up and as you say, once they are painted (which is way off yet) any differences will be drowned out to an extent.

1/72 is my favorite scale, and I can't recommend the plastic toy soldier review site highly enough. I was inspired by you War in the age of Imperialism posts and decided to paint a few of the figures to see how they look. So far they paint up nicely, and are also easy to paint. I'm looking forward to your next post on the subject.

You are ahead of me in respect of painting some of these up for sure! I have had the brushes out this weekend but purely for the ACW ships - if I started anything else my distraction gene would kick in and painting anarchy would follow!

As it stands I have everything I need for the European armies but will need some tribal native types as well as auxiliaries so for me at present it is all about raising the material required. The PSR site is a goldmine for this part of the project as I can take a good look at what there is and how I can use it.

I would be keen to see how your painting came out - the inspiration may be dangerous though!

I've been distracted by this too. I'll post the pics on the Portable Wargames Facebook page when they are done (hopefully today), and maybe a battle report.

I have been enormously disciplined today and have confined my painting to five ACW ships currently under construction. It is funny though, now that I have restarted on the ACW models the distraction accorded by the Colonial stuff drops back to its place in the queue!

I am looking forward to seeing your figures and a small battle would be a delight!