The Scale of the Revision 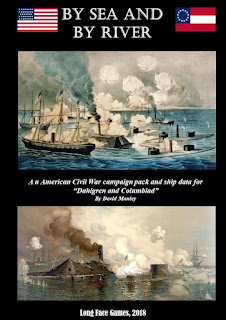 David Manley’s excellent campaign supplement for his Dahlgren and Colombiad rules - both are available from the Wargames Vault, as well as the rest of naval wargame rules.

I was able to spend some time yesterday going through the draft of my ACW rules to see what needs to be done to incorporate the two square per model revision. As expected there is a fair amount of work but I have managed to trim a lot of the incidental text within the rules. The main areas of revision that are left are firing arcs and the ship specification charts. The former I am prepared for and the latter will give me an opportunity to expand them quite considerably. As you may recall the original list of these was modelled on those contained in David Manley’s excellent Dahlgren and Colombiad rules. The campaign supplement supporting these rules - By Sea and By River - contains a far more extensive list of ship specifications which is also broken down by vessel types. This will prove invaluable to anyone that is new to the period.

Firing arcs are now far more logical in their application than using the previous single square method but obviously I will need to redo the explanatory diagrams. This is not difficult to do (especially now that I worked how to design them!) but it is time consuming. No matter - it will all come to pass in due course but for now though, it is back to the ships.