Painting and the Gnawing Idea 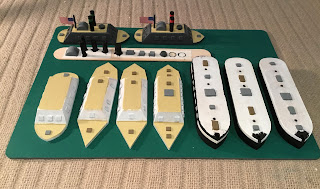 Once the ironclads are finished the frigate and sloops (the three on the right) will be ‘deck finished’ - including varnishing - prior to the masts being added. The craft strip contains funnels, pilot houses and a paddle box for the City class gunboat (on the left) waiting to join her two sister ships (at the top of the picture).

As is now my custom I retired to the man cave for a little brushwork this evening and whilst it may not seem like much I was pleased with the progress. The four ironclads now have their woodwork painted and all the deck fixtures have been second coated. The next stage will be the armour and the final assembly followed by varnishing and the ensigns. I also took the opportunity to go over the green funnel bands of the U.S.S. Louisville (top left of the picture) so they are now more obviously, well, green. For the record the next ship in this class will have yellow funnel bands.

Work on the battle report continues apace and I hope to be fighting the planned action this weekend, by which time the ironclads should have been commissioned.

The gnawing idea continues to gnaw - no details as yet but it will require a similar approach a to that of the ACW and industrial quantities of MDF….

Loving this project David, nice to see progress. Don’t gnaw on your ships, you’ve put too much work into them.

I have no real interest in naval wargaming but have found myself following your batch of posts with great interest. I really like your design and builds for the ironclads, they really look great. Is this another rabbit hole I find myself going down? If so I know who to blame!!!

Thank you kindly sir! Love the comment about gnawing on ships but rest assured I certainly will not be doing that!

The gnawing idea continues to tempt and tease me though….

Thank you for following my rather rambling and meandering posts on the subject! There is a rabbit hole to be sure and I should know as I fell headfirst down it! My plan originally was to build around a dozen representative models and here I am finishing up with around seventy ships!

Naval wargaming is good fun and also has the virtue of being pretty inexpensive to get into - take a look at Bob Cordery’s Gridded Naval Wargames for a very good introduction to the genre.

Glorious. Never seen such a tidy work area either!

Specially posed old chap! Seriously though, I tend to have a bit of a tidy up when I have finished a session - mainly so that I can be sure of finding things when I start again….

It is all coming along nicely though!

Cheers old chap! They have moved along since then and indeed, should be finished for the weekend.