Aircraft of the Aces by Del Prado 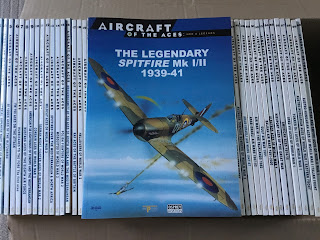 Now that is something you don't see everyday!
﻿

Well I certainly did not see this one coming! For the most part by this time of year the outdoor boot sales have closed up for the winter. However, in the village there is an indoor version that is held on the last Sunday of each month at the Rayleigh Mill Centre. To be honest it is not great and takes around a half an hour to view the entire thing. I have purchased a couple of things from there over the  years but to be honest usually score ‘nil point’ so to speak.

That changed in fairly dramatic fashion today though.

We were almost finished and about to leave when I noticed a box on the floor by a stall near the exit. It was a picture of an upside down biplane - later identified as a Sopwith Camel - which caught my eye. A closer inspection revealed it to be number 60 of the Aircraft of the Aces part work that was released as a ‘Del Prado/Osprey mash up’ magazine with a 1/100th scale die cast model with each issue and was around 1999 to 2001 (according to the internet of things). 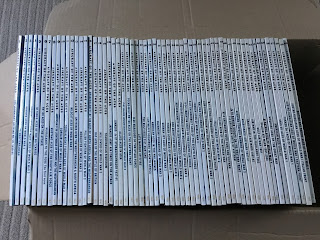 You should be able to make out the titles of the volumes in the set - I did not fancy typing all 60 out!
﻿

I then realised what I was looking at - a complete set of the Aircraft of the Aces part work, sans the models. That is it. All 60 Osprey sized volumes covering aerial combat for WW1 to the Gulf War.

These volumes can still be picked up individually and they tend to go for around £5 a go on Ebay. the whole lot cost me £10....

£10 or roughly 16.66p each. It doesn't matter which part of the universe you come from - that is a bargain!

Each volume is 64 pages and they follow the general Osprey style format so there are lots of colour plates and ideas for paint jobs. If I was being ultra picky I would say there are some notable omissions from the line up - particularly heavy bombers - but this is offset by some titles covering less well known aspects of the air war (Finnish aces anybody?). The main bulk covers WW2 but WW1 has a tidy selection as does more modern air combat starting with Korea.

I am very fond of aerial war games and have played many board games over the years on the subject. Starting with Ricthofen's War, Wings and Aces High followed by Air Force, Dauntless (and the expansion kit) and Air War. More recently I have played Axis and Allies: Angels 20 and am also looking at 1/600th for both WW1 and WW2, for which I have a modest amount of kit.

All in all the above is a really nice addition to the collection and it will serve to give me much enjoyment when undertaking my aerial adventures.
Posted by David Crook at 08:48

What a find! A really, really good bargain (one could almost use the term 'a steal') that will give you lots of enjoyment if you keep them ... and repay for themselves many times over if you choose to resell them.

ironically my first thought was to sell them on at a profit but I have decided to keep the collection intact. There is much I can use therein so it would make sense to do so.

Certainly a good £10 worth!

What a great find! Nice one :)

I was very pleased indeed!

That is a great find, David!

It was not something i would have expected to see so I was very pleased to snap this up. I have a number of 1/600th scale aerial projects in mind (and have the models for) so this is quite a timely acquisition.

Occasionally one needs a little inspiration to tackle a project that has long been in the making. I reckon this may be it!

I have been grinning like the proverbial Cheshire Cat....

What a find! I wish you joy of it.

It is funny and coincidental that the day before I purchased this little lot I was actually looking at my selection of 1/600th scale Battle of Britain models from Tumbling Dice and thinking that I really needed to do something with them!

Perhaps I should do the lottery next weekend or rather think about it the day before first....

PS Dublin is not likely to happen until the new year now but I will let you know as soon as I do.

A nice bargain indeed. I picked up most of their companions from the Del Prado Napoleonic range on Ebay pretty cheaply. They're a great alternative to forking out for the actual Osprey books.

I would have to agree with you - 60 volumes for £10 is a bargain which ever way you dress it up!

I am feeling smugger than the smuggiest of smug things although it has given my 1/600th aerial ideas a bit of a nudge...