'Imagi-Naval' or a Chinese Takeaway 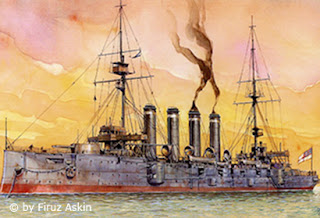 H.M.S. Eurylas of the ill-fated Cressy class of armoured cruisers. She avoided the torpedoing of Aboukir, Hogue and Cressy by having to return to port to recoal.
﻿

The present time is a very good example of the how the pattern of my wargames have gone since as far back as I can remember. Due to the recent arrival of the 1/2400th scale British and German ships - based on the China Station and East Asia Squadron - my naval wargame thoughts have been placed firmly in the South China Sea. this has been 'helped' by the recent publication of White Bear, Red Sun - a Russo Japanese campaign and tactical rule set by David Manley - and reading Edwin P. Hoyt's book The Fall of Tsingtao.

Aside from the above I have also accessed my own memories of the famous WW1 South East Asia naval campaign organised by Eric Knowles after the conclusion of Madasahatta in the late 1970s. this was set in the same area and became a much fought over part of the world - using 1/1200th scale models and a table based variant of the Fletcher Pratt naval rules. 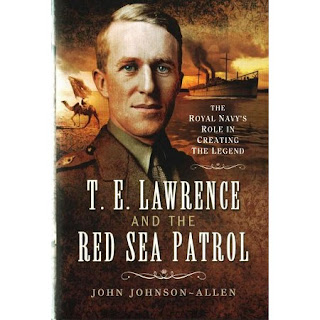 An interesting read about the vital part played by the ships of the Red Sea Patrol in supporting the Arab Revolt.
﻿

This is all fine and dandy but I have, as usual, managed to deviate from what I was originally planning - and I was reminded of this by a quick glance at the bookshelf yesterday evening! The book in question that served to bring me back to what I should be looking at rather than what I am looking at is of course T. E. Lawrence and the Red Sea Patrol by John Johnson Allen. Now this is not a bad book although their are a couple of errors contained therein. What it does do though is to add the naval dimension to the Arab Revolt - ships of the desert meeting ships of the sea so to speak.

The ships of Red Sea Patrol consisted of some old Royal Navy cruisers and vessels from the Royal Indian Marine. My original plan - before getting sidetracked into the South China Sea that is - was to raise some expanded forces for the allies and allow for a larger German presence in East Africa. This ties together two of my favourite campaigns of the Great War - that of Lawrence and of Von Lettow Vorbeck. I have assumed that the main fleet units for both the Royal Navy and the Germans are safely back in home waters glaring at each other across the North Sea so the colonies have to make do with what they can from a naval perspective. This will typically out of date or second line vessels.

That is more or less the plan. It means that I can use a great variety of older types and also that the actions will typically be far more manageable in respect of numbers than driving great lines of dreadnoughts about.

Firstly though, the models need to be readied.

I sometimes wonder what might have happened if Fisher had not had his great clear-out of obsolete vessels whilst he was First Sea Lord. Quite a few of them were still in reserve only 10 years before the Great War, and had they not been scrapped, might have ended up as guardships or floating batteries at various ports around the world.

Something that you might wish to consider in your imagi-nation naval campaign.

That is a good point - and would be a good excuse for incorporating such obsolete vessels.

To be on the safe side I have been looking at the island of Madasahatta again although suspect that using my own version would be a better option.

Over the past few months I have found myself looking at the map of Madasahatta more than once and thinking to myself 'if only I could re-visit it'. Perhaps I will ... or perhaps I ought to resurrect Dammallia et al and get some wargaming done rather than thinking and writing about it!

It is very true that it is never the thinking that is the problem - it is always the doing!

Did you ever give any further thought to a Heroscape based map of Madasahatta? I seem to recall this being bandied about at some point but good be wrong.

I did attempt to draw a Heroscape map of Madasahatta, but the results were not quite as good as I hoped that they would be. Perhaps I ought to give it another go one day!

It may be something worth revisiting - I am certain you have enough tiles to do it justice!