New Kit on the Blocks 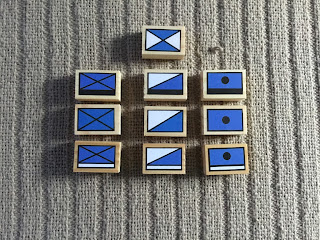 The blocks revisited. For the key units of infantry, cavalry and artillery I have added a black and a white band. Black is intended for use with elite or 'heavy' types whilst the white is for 'light' types. the white band on the artillery block will also be used for horse artillery where there is a distinction between foot and horse.
﻿

In my previous post I mentioned that I had been revisiting the block armies with a view to using them in action once again. I also acknowledge the problem of following the action using them unless the narrative (and photos as well) is more closely aligned to what was happening on the table top. I had forgotten o mention though that after I had last used them I actually went and produced some additional types - with the intention of making identification a little less problematic when in action.

I am planning on producing some national flag blocks to work with the command block (the one at the top of the picture above) which will also give a better sense of nationality.

One could be forgiven for thinking that the sole reason I have gone to this trouble is merely to produce better, more viewer-friendly after action reports for the blog. This is partly true but it is also to address a need from a personal perspective. Having some variation within the same notional troop types makes the units more obvious.

Rather than just throwing an action together I want to spend more time in developing the back story and adding weight to the after action report so having units blocks that are more easily identifiable makes a lot of sense.
Posted by David Crook at 08:50

Many thanks old chap! The original blue blocks were a lighted shade than the current version and in retrospect I wish I had stuck with the earlier hue. Still, I suppose I could always create another set in that particular shade!