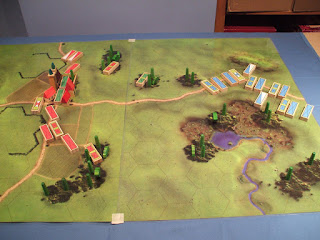 A long time ago in a loft far, far away...The original full sized blocks (I still have most of these) in use on the Axis and Allies maps. The action is a Napoleonic 1815 inspired engagement in Belgium.
﻿

It seems quite incredible that the action pictured above took place nearly six years ago! I am of course referring to the very first game I undertook using my block armies. This was quite unique as it was one of the very few games that I fought using uncut Jenga blocks - these are now half sized - and my laminated Axis and Allies maps. As I recall I fought the action twice as the first time it was a little underwhelming as a game although the purple prose flowed rather nicely....

The game is in the Games folder but you can find it here should you want to read it.

One of the early decisions I took in respect of the block armies was that they would be used a test bed for various periods so I could fight actions prior to investing monies and time with painting etc. Since I have had the blocks the only painting I have tackled to any great degree has usually involved ships, other than the odd experiment with figures. I have a number of figure based projects to undertake ranging from 1/600th or 3mm up to the 54mm Sons of the Desert set up. However, first of all I need to get some ships painted which fortunately I am able to do fairly quickly using the famous 'Gow' technique. Of the figures themselves the 1/600th kit will feature first, mainly as I can get them painted and ready fairly quickly as well. 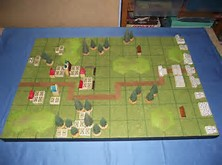 The blocks in their current iteration in use with the Portable Wargame (actually an earlier pre-publication version) rules.
﻿

So what does all this mean in the short term? Well, I shall be dragging the block armies out again and plan on using them in two similar ways. I will be making use of my Heroscape terrain with single blocks representing units and counters for hits suffered and I shall be using my Axis and Allies double sided and laminated maps with more usual Command and Colours/Portable Wargame sized units (the famous 4 infantry, 3 cavalry and 2 artillery standard).

One of the issues I have faced when using the block armies in the past is that the games can be quite hard to follow after all, one block looks very much like another. I have certainly been guilty of not giving sufficient back story to support the unfolding action in the past and having read some of my older posts can only agree with observation! When used as a '3D military map' it is important that the narrative supporting the pictures is relevant and provides the reader with the information they need to follow the action. When reading about a battle in a book for example, it can be frustrating if the text does not support the map at a given point or even vice versa. As a game should be a dynamic event it means that even more care needs to be taken to ensure that the action can be easily followed and, more importantly, impart a real sense of flavour  for the period.

With this in mind I shall be embarking on some new games (not before time as well!) but with a much tighter narrative to support the action. Some of my previously recorded games followed this approach quite closely and so made for a much more entertaining read - I am not talking about the 'purple prose' here - but the overall quality was very uneven. Oddly enough some of the least interesting games to play actually read quite well.

I enjoy writing but like everything else I do I am notoriously 'short-winded' and have an attention span that can best be described as variable. I need to ensure then that when I fight a battle I need to spend time properly preparing it and making sure that the action is clear and easy to understand and above all, entertaining.
Posted by David Crook at 09:38

Your blocks look neat! I could envision using your set up with blocks as an operational component of a campaign game and then switching over to figures when forces meet. You have given me some ideas. Can Jenga blocks be purchased separately?

Many thanks old chap! Your idea is a good one and is something I would do once I had the models. In the same way I have used Columbia Games Napoleon for a (long since disposed of) 15mm 1815 set up.

The Jenga blocks I have used are not the official version as these have the word Jenga embossed on them. My blocks are from game available from the Works in the UK called Tumbling Tower. these are plain pieces of wood. I got a local carpenter to band saw around a dozen boxes of these in half. The labels were drawn in MS Paint and printed on A4 label sheets and cut out.

I have the following colours available, blue, red, green, grey, khaki and olive. I also have some more colourful versions I use for tribal native types. The symbols used would be familiar to anyone that looks at military maps.

Welcome aboard! The maps used were from the Axis and Allies collectable miniatures game and are not only double sided but are also geomorphic so there is plenty of choice. I may make some overlays at some point to add to the variety available.

The lower of the two pictures features a square gridded board 90cm by 60 cm with 75mm squares. The roads are cut from felt, the hills are from Hexon, the buildings are from the 'Town in a Bag' set available from Amazon and the trees were from Ebay.

The game looks very nice when set up and as I have often said brings to mind a 3D map.

I am glad you liked it.