Britain and Greece in WW2 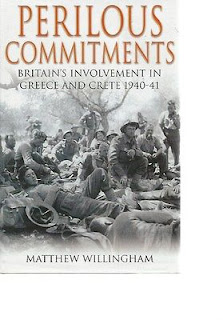 I was browsing through Ebay over the weekend when I came across the above title going for a song - so I purchased it! I have long been interested in WW2 in the Mediterranean - more specifically the Greek theatre - and have a number of books about the fighting in the Aegean and of course the airborne invasion of Crete. The above title covers the Crete operation at the end of a sequence of political and diplomatic events that saw British and Commonwealth forces deployed in Greece to fight the Germans.

Whilst I am familiar with the Crete and Aegean theatres the early stages of the Greek affair on the mainland are something of a mystery to me so I hope this book will serve to round out my knowledge.

From a gaming perspective I consider the whole theatre to be of interest although how I would tackle it I am uncertain of. There is a lot of potential though and so this will be something to look at in the future.
Posted by David Crook at 13:25

Have you read Crisp's (author of Brazen Chariots) account of his experiences in Greece titled The God Were Neutral?

I have not heard of this one so after your mention and a quick piece of Google-fu it is certainly on my to read list!

The Greek and particularly the Crete campaign are subjects of interest to me. A pair of books I have, but yet to read, are the NZ official histories: To Greece by W G McClymont and Crete by D M Davin. They are 500 pages each and are packed with information, although I am yet to sit down and read them.

One book I have read and can recommend is Anthony Beevor's book on Crete.

That would be a lot of reading methinks - far to much for my limited capacity! I am waiting on a copy of Crete by Beevor - I have enjoyed his other works so am looking forward to the same.

As PS to my comment, I've just taken possession of MMP's new Crete boardgame which has an abbreviated book list which I've included in my post on the game along with some links to related online books on the campaign, including the NZ one which you might find worthwhile. It's a big book, but online it doesn't seem so daunting :-)

Wow! The game looks really good but not for the faint hearted! Many thanks for the links as well - online reading is good and as you rightly point out, never seems so daunting!