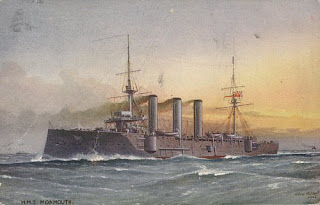 I have made a number of assumptions with the models I have acquired for my next bout of naval gaming with the main one being that Great Britain did not sign any form of treaty with Japan and was therefore required to keep ships in the East. For the most part they have a numerical superiority over the Germans but the ships themselves are largely second line

The models I shall be using for my planned 1906 to 1910 'imagi-naval' set up have been sourced from Tumbling Dice and are based on the discount starter packs as follows.

The additional models I added to this are as follows:

This will give me 6 battleships, 6 armoured and 6 protected cruisers and 18 destroyers. All of the above (at least larger than destroyers in size) saw service overseas on a colonial basis. I intend deploying them anywhere from South China to the Red Sea. 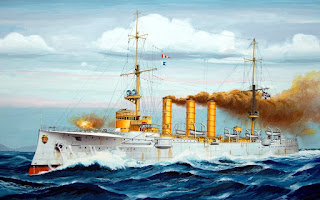 The additional models I added to this are as follows:

The Germans then will have 4 battleships, 5 armoured cruisers, 6 light/protected cruisers and 12 destroyers. Their fleet has some very old and slow ships alongside the newer cruisers and although the Royal Navy outnumber the Germans in the  1914 East Asia Squadron they possess a modern and powerful force. It was for this reason I allowed the Swiftsure and Triumph to head East as a foil for the two German Scharnhorst class cruisers.

I may add some later armoured cruisers to the Royal Navy and perhaps a brace of modern light cruisers.

The bases for these models are currently on order as are the flags. Whilst I am waiting for them to arrive I can give some thought to the livery of the ships in question - do I go for China Station/Tropical White or should I go for the more practical overall grey?

At this stage I am leaning towards the overall grey simply because I will be using the ships for actions set during the Great War as well. In any event I have a few days to decide.
Posted by David Crook at 14:59

I prefer the white with African yellow livery, myself. My 1898 American fleet is in the peace time livery and looks much better than grey. Besides, how the can the Great White Fleet be grey?

The white livery has a certain charm about it but in my case practicality will mean that grey will probably be the order of the day. Unless I acquired additional models and painted them in the appropriate scheme as needed - a sound idea but I doubt if my bank balance could cope with the strain!

This line up is very similar to my China Station RN fleet c1904-05, although with one or two minor differences. In my alternative version of events, the Japanese go to war with the British after an 'incident' forces them into confrontation, rather than the Germans but otherwise, it's the same sort of thing.

There are some really interesting 'what if's' with lots of opportunities to pull in the Americans, French, Russians and so on, while still being entirely feasible. I'm looking forward to your next update!

And it would be easier to paint them grey rather than full China Station white. I believe that some of the larger RN warships arrived on station and were re-painted when they got there. Also, the Japanese abandoned their white hulls as soon as the RJW kicked off, in order to cut down on maintenance and to provide a degree of camouflage, so grey would be entirely reasonable for the British and German fleets too.

Go with the tropical colours. Which is easy for me to say as I'll not be painting them.....

I think I have pretty much settled on the overall grey simply because I will be suing these for Great War actions as well. The tropical scheme looks nice but would be limiting.

Besides, the Gow technique works very nicely with grey warships....

There is a world of potential as you rightly point out and I fully intend expanding the collection in various directions as the models become available. Grey will be the way to go methinks as it will cover a wider timeframe which will suit me ideally.

I plan to make a start on the models just as soon as I get the bases.

For sure they are more expensive than 1/3000th but I always think that larger scales are better when the ships are fighting at shorter ranges. I always found that 1/3000th scale ships for the pre dreadnought era tended to come up quite small. The extra 'heft' of the 1/2400th models gives then greater table presence IMHO.

They are lovely models though.