In my previous post I touched upon the latest bout of wargames insanity I have embarked upon, namely the French Foreign Legion circa 1900 and their Tuareg/Berber opposition. I also mentioned that the figures I am using are from Armies in Plastic in 54mm. With this in mind I thought it would be a good idea to show you what he figures look like. 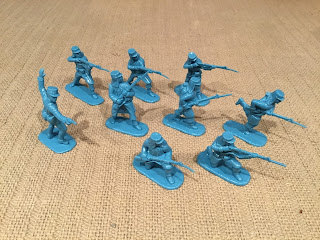 Of the 10 poses you get in a box of 20 figures here are 9 of them. The missing pose is laying down firing - a position I will not be using. The selection of poses in quite sensible and I have sufficient figures to be able make some uniform units. 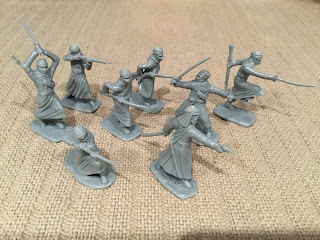 ﻿
Again, there are 10 poses in a box of 20 and here are 8 of them. I miscounted when I sorted the figures out so there will be a single usable pose as yet unseen (I will post him when I have found him!)- the other is of course the laying down firing position. Berber tribesmen typically wore a full face wraparound veil unlike the headdress usually associated with Arabs so this set is a little bit of a mixture as the rather natty looking command type (bottom row on the right) is wearing a more usual 'Arab' dress. I will make use of him though as he is rather a splendid fellow. The rest have a selection of firearms and hand weapons - enough to satisfy the most belligerent tribesman. I also have 10 mounted Arabs which I will unveil in due course - they also have the mixed headdress issue.

As far as painting is concerned these will be getting a flat finish and will also be gloss varnished. I need to organise some bases for them which is complicated slightly by the variety of base depths. Infantry will have a 3cm frontage with depths to suit. The mounted figures are on uniform bases so will be easier to tackle. As they will be based individually I fully intend using the figures with The Men Who would be King as well the Portable Wargame.

As far as unit sizes are concerned I am considering wither 12 or 16 figures for infantry and 6 or 8 for the cavalry. Artillery will be a gun and three crew.

Labels: Colonial, Sons of the Desert

What a splendid set of figures to work with! Lots of active looking poses ... although personally I don't particularly like figures with one leg in the air. They look rather unstable to me, but I'ms sure they will be all right once they have been based.

Looks like you have a busy few months ahead of you.

Hi Bob,
I know what you mean about the one legged poses but with some careful basing they will be OK. Figures laying down firing do my head in - mainly because of the size of the table footprint they occupy. I will be busy for sure but first off I need to organise the basing. I am also waiting on a couple of FFL uniform books as well - Osprey for one and Martin Windrow's uniform book for the other.

The AIP figures are well balanced (which is why the running figures are upright) with big bases. I never had a problem with stability with either side of my Sudan campaign forces.

I am looking to base the figures purely from an aesthetic perspective. I will also make some larger trays for the odd 'big battle' game - possibly something akin to Volley and Bayonet by Frank Chadwick et al.

Don't dispatch with the prone figures so quickly! Prone figures may look silly marching about but they could be used as either status or informational markers. Depending on the rules you plan to use, I could envision the prone figures denoting a unit "going to ground" or a disorder marker. Perhaps your game requires a sniper figure?

That is very true and if I am honest I was not going to ditch them - mainly for the reasons you outlined. However, they do not feature as a priority on the painting schedule - rather they are a 'nice to have...but not yet!' item.

David, that is how I feel towards painting limbers. A necessary evil, no doubt!

Actually you could use them for pinned markers now that I think of it.

TMWWBK is a cracking set of rules that work rather well.

Pinned markers/snipers etc is a good shout old chap but I doubt they will be done early on!

Yikes! I had not even thought about limbers yet.....

Crrazy .. yet fun in period and scale
Bob Cordery is teasing me into the Colonials with the Portable Wargame series!

Crazy for sure but surprisingly ‘doable’. The Portable Wargame will be my rules of choice for this project - they work really well - but I have a couple of things to do first....