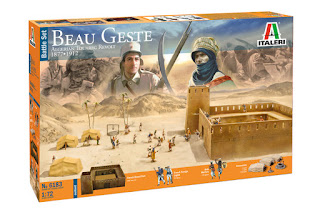 In my previous post I outlined my thoughts around the French Foreign Legion project (more accurately I should refer to it as the Berber project being as how they will feature more often than the legion should my Great and Interwar ideas come to fruition!) and the choice of figures I would be using. I mentioned that I would be using 15 mm figures from the extensive range produced by Minifigs and available from Caliver Books. As well as the Legion I shall add in Turcos, Spahis, Senegalise Tirailleurs and the Chassers D'Afrique amongst others whilst the opposition will comprise Berber tribesman for the main North African theatre and Tuaregs for the Saharan. I should point out that whilst the Tuareg are of Berber stock they look rather different to the more usual Berber types.

That well known bon vivant, wit and raconteur Geordie and Exiled FOG posted a number of comments on my previous post which certainly fired up the creative juices so to speak; chief of which was a link to the recently released battle set produced by Italeri - Beau Geste - the Algerian Tuareg Revolt 1877 to 1912 and is pictured above. 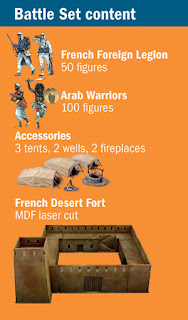 On the face of it this set looks like a great idea as you get 150 figures, a rather splendid looking fort produced in MDF and a small set of very useful accessories - everything you might need to kick start a set up. So far so good. What lets in down though and is the reason I will not be buying it are the figures themselves. These are the old ESCI French Foreign Legion and Muslim Warrior sets and for a fuller review of these sets read here.

The figures are not bad from a detail point of view but both sides suffer from some problems - the 'Arabs' more so. I am by no means an expert on the subject but the set consists of Afghans, Bedouins, Berbers, Tuaregs and even Mahdists - each of which wore quite distinct dress. This would mean that should one wish to raise a purely Berber force then one would need to invest in a number of boxes to extract the appropriate figures - which is hardly economic. The figures for the Legion also have some issues around uniform details and equipment but this would be less of an issue.

I do not consider myself to overly picky but for my purposes this set simply does not work as I have no need for Bedouins, Afghans or Mahdists. I have no problem with 20mm as a scale, nor with using plastic figures but this set does not seem such good value when you think about the extra figures you would need to inject a degree of accuracy.

In many ways this is a real shame as the idea is sound and the fort looks very nice indeed - an update on the old Airfix version produced in the current material of choice, MDF.

Many thanks to Geordie for flagging this up for me.
Posted by David Crook at 10:37

I nice looking set though, and on the face of it not bad for the price.

The figures are very nice but they are a real smorgasbord of types which means that they are less of value because you would need to invest in a lot of sets to get viable forces for the 'Arabs'.

The Legion issues I could probably cope with but not so for the opposition.

I am not convinced that it represents good value for money anyways when you think that you are getting 3 boxes of plastics, the fort (which is rather nice) and the accessories for £59.99. Personally I would have thought that knocking a tenner off would not have been overly generous!

It is not that I am a Scrooge but it does not seem that good a deal even if the figures were correct.

Are you going to Skirmish?

Are these Italieri figures the same that were included with the old Airfix Fort Sahara kit? Oh, how I wanted that one as a kid!

The figures are the same as was in the old ESCI sets. There were Airfix figures for the Legion and the Arabs - they were rather nice as well as I recall - and I am pretty sure they did a playset with them in but not with the ESCI versions.

Interestingly enough ESCI produced a playset for the North West Frontier which featured their Arab set and the British Colonial infantry.

As I say, the ESCI figures are nice but of limited use unless you buy a lot of them!

I didn't acquire the "big set"
But by heck I was sorely tempted
But I did acquire a packet of each Italeri (old Esci):

Got my eyes on a HaT Gardiner Gun too!

Harder plastic sand I nice painting project
Good enough for my "general" desires ;)
I hear where you are coming from and Trebian has shown off some nice Mahdist 15 mm forces recently ;)

Many thanks for the heads up with this item as I had not seen it. In the past I would splashed the cash in a heartbeat but now I am a little more restrained with these things....

As a quick Hollywood style Colonial set up it would be ideal but I still think it is overpriced.

Good luck with the plastic Colonial dabble - I would be keen to see the pictures in due course.