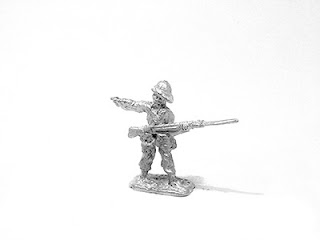 BZ12 - Infantry standing, pointing backwards. I rather like this figure and reckon he would make a great NCO.

Over the last couple of months I have been browsing the Spencer Smith Miniatures website on a daily basis. Ignoring the myriad temptations it has in respect of STS, the Classic range, Jacklex, Tradition etc the list I have naturally been drawn to is what I would call the original Spencer Smith ranges. For most of us this means the 18th century, the Napoleonic wars and the American Civil War. However, there is also another range included in this section for the Zulu Wars.

I have seen examples of figures being used and well documented from the first three periods but never from the Zulu Wars. As an aside if any readers have done so I would be keen to hear about it.

The range is quite basic and there are a few gaps in the figure selection but there is sufficient variety available to be able to get together an old school style Portable Wargame sized set up. There is no artillery available for this range so one could convert the ACW gun crew to suit and use the artillery piece from that range if one was not too pedantic.

I have posted a selection of figures from the range but suggest looking at the website for the full listing. 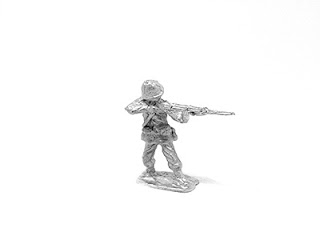 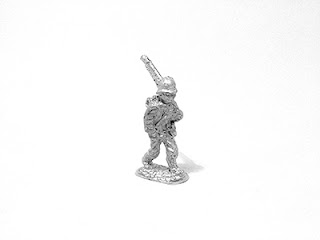 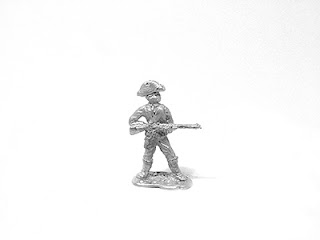 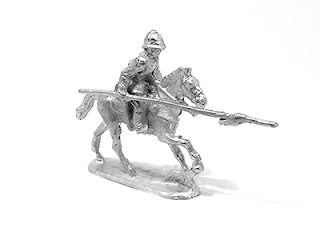 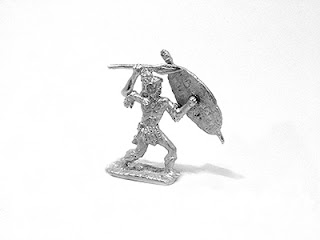 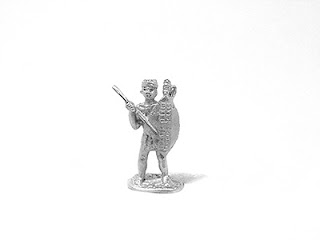 The British range has the usual Zulu War thrusting and lunging selection of figures whilst the Zulus themselves include the obligatory warrior in a British tunic and a rifleman as well as an Induna.

The figures appear to be more detailed than the other ranges in this series - ACW, Napoleonic and 18th century - so I am thinking that they were a later range. In any event I will ask Peter Johnstone at Spencer Smith to see if he can shed any light on their history.

The Zulu War for me has enjoyed a chequered career in terms of actually gaming it. My research into the war seems to stick at the first invasion and the actions thereof. I have owned a selection of books over the years that has passed through my collection but I still get inspired by watching the film Zulu for the umpteenth time.

At the risk of offending any devotees of the period I have always looked at the actions as being rather limited from a tactical point of view. I have in the past likened it to the old arcade game Space Invaders where unlimited numbers keep on attacking and are scythed down in droves. However, this somewhat blinkered view has changed over the years as gaming the period presents both sides with opposite tactical problems - which for me is now the basis of a very interesting game.

My order to Spencer Smith for the remaining ACW figures I need will also include some samples from this range - just to see what they are like of course....

I do agree with your tactical view, the Zulus had ridiculous casualties!

I think that to get best of the period on the tabletop one needs to be very scenario driven as a 'get them out of the box and line them up' style of game is never going to work other than to give the British dice rolling practise!

Certainly one to think about though.

We'll like you said Dave, you wouldn't need too many figures?

Thanks for sharing the pictures - they are lovely figures.

Using figures from Spencer Smith for the Zulu War I reckon I could get away with around a hundred figures all in - 50 Zulus and the rest for the British.

It is certainly tempting!

I am rather taken with them and so shall be ordering a few samples to see what they are like.

Interesting mini's...I may take a look myself. The more I read about the AZW the more I find it less one sided. There are plenty of small scale engagements that can be recreated and there is a lot of scope for what-if scenarios.

I think that the old chestnut of 'lining 'em up and shooting them down' is an easy trap to fall into - certainly if you rely solely on the film Zulu as a reference! Under ideal circumstances this would probably be the case but the Zulu was no pushover and, if used carefully and able to exploit their field craft, was a worthy adversary.

From the gaming perspective you have two forces that each have differing tactical requirements so each gamer has a different set of problems to overcome.

I have ordered some samples from Spencer Smith and will post about them when they arrive - which should be in a couple of weeks.