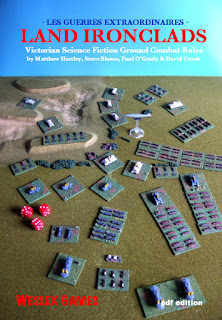 I remember it well and as I recall my sole contribution to this was the section on the Turkish Army and the suggestion that 1:1200th should be the scale of choice so as to be compatible with Aeronef.

Many of my recent posts have been quite reflective in nature. I offer no apologies for this as events of this year have given me much pause for thought about things I have done and things I have yet to do whilst I am still able. From the perspective of this blog it has manifested itself in my revisiting many abandoned projects and taking a second look. For sure there are many that were lost in time and will remain so but there is the odd few that have surfaced that have given me a few ideas.

I should qualify this by saying that the contents of this post fall definitely in the hibernation state - projects that WILL be looked at in due course and not consigned to the landfill of my gaming history.

Victorian Science Fiction is something that I have enjoyed reading about via Jules Verne, H.G. Wells, Arthur Conan Doyle and others and a number of years ago I was very heavily 'into it' via Aeronef (from 1999 as I recall) and the follow on rules set in the same timeline called Land Ironclads  both published by Wessex Games under the stewardship of Steve Blease. 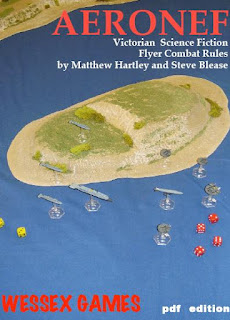 Enormous fun and responsible for launching an enormous range of models available from Brigade Models and even a few suitable types from Irregular Miniatures.

Aeronef, written by Steve Blease and Matthew Hartley, covered Victorian airship combat with everything from single seat heavier than air craft up to giant sized armed dirigibles. It is huge fun to play and there were many exciting games fought at SEEMS back in the day. The rules were supported initially by Brigade Models  and the range of nations represented and classes of vessel is enormous. As an aside Brigade also have another set of rules available called Imperial Skies which cover a similar type of combat but with an alternate timeline and a rather more detailed approach.

My own contribution to this was limited to scratch building air fleets for the Turks (no surprise there!), Greeks and Bulgarians using mainly converted model aircraft bombs - the nations represented, being minor powers, mainly relied on dirigibles for their fleets - and lots of plastic card and sprue. I also made use of that rather nice small kit of the Hindenburg for a couple of ships including a Turkish aircraft carrier. This was of course before Brigade released any Turks....The scratch builds went to a new home as Steve Blease took them off my hands. I am sure I have some pictures kicking around somewhere of the models but they were built a couple of computers ago.

I penned a couple of articles for the journal of the Science Fiction and Fantasy Wargames Society (SFSFW) around the back story of the Turkish air fleet -the Ottoman Air Fleet or OAF for short - and one of the extraordinary things that came out of this was the start of my 'long range' friendship with Paul O'Grady of The Man Cave fame. I say long range for the simple fact Paul lives mostly in Australia. We have met a couple of times when he has been in London and have swapped wargaming stories as well as downed a few beers as one does in these circumstances... I really enjoyed working with Paul on this one and we planned to write a follow up. Sadly we never got around to it. Note the very attractive walled town scratch built by Steve Blease using a CD for the base and with the walls and buildings fashioned from plastic sprue.

Paul and I co-wrote a mini campaign supplement for Aeronef which was hugely satisfying and a very enjoyable experience. We planned to follow this up with a further adventure but life got in the way and the idea faded away.

I was rather more involved with Land Ironclads in that I penned the section on the Turkish army and proposed using 1:1200th as the scale of choice to tie in with Aeronef and the proposed naval set called Aquanef. The armies raised for use with the rules largely featured the extensive range of figures in 2mm available from Irregular Miniatures. The Land Ironclads themselves again were produced by Brigade. I played this game many times on a solo basis and it was great fun. I even got around to converting some Irregular Miniatures models into something a little more Victorian looking - well I added funnels and flags so that should count!

Aquanef  - the naval set - was to have been the naval set to tie in with the others. The game was play tested at a show by Steve Blease I believe but he rules never made it into print as far as I know. I can remember play testing an early version of the rules at the club featuring a battle between two undersea Aquanef. The game featured a 3D system with 5 or 6 depth levels ranging from the surface to the 'Stygian Depths'. The show play test featured surface and subsurface elements with the surface ships based on upturned clear plastic pint glasses and sea coloured CD bases. I would have loved to have seen the rules come to print but alas it was not to be.

What does all this mean then in terms of where I now? Well I am not planning on rushing out an order to Brigade Models anytime soon but there is some potential to bolt on some land elements to the 1/600th models I have. This idea has some mileage especially as Brigade produce some rather nice Martian 'not quite War of the Worlds' fighting machines. I think the point here is that should I wish to I could readily tackle some Land Ironclads style actions merely by investing in a few models and using them in conjunction with the kit I already have. Whilst it is not on my immediate agenda it is something work remembering for the future.

Aeronef is something else. There are models aplenty available but with my usual degree of perversity I would prefer to build my own. Sadly my time is rather limited at present so this is unlikely to happen anytime soon.

I have rather enjoyed this little ramble around a piece of my wargaming history and I fully intend not letting the whole VSF thing sink without a trace again - I will do something with it in time.

I'm a massive fan of Aeronef, written articles for Ragnarok, run campaigns at the club etc etc, but haven't played for years! I may well dig it out and give it a spin now you've dusted off the idea. :O)

Some excellent publications displayed there my friend :-)

Sadly, VSF is also a passive genre in my hobby lobby of recent years. The large collection of models awaits another time and I will not part with it. I hold out hope for Aquanef one day and have occasionally thought of darling in some sort of Red Planet 15mm adventures, but a lack of opponents continues to confound me.

Perhaps you need to emigrate and join me in the antipodes? :-)

It is enormous fun to play and the models available from Brigade are lovely and comprehensive as to their coverage. I always preferred the dirigibles and will try and find the pictures of my scratchbuilds. I would like to revisit it at some point but am unsure when.

I suspected you would comment on this! We had some fun and I reckon it must have been some kind of record for long distance collaboration we set with the Aegean title! I was really looking forward to Aquanef but it kind of withered on the vine which was a shame.

As to moving down under I would be game but I am not sure about SWMBO!

Actually, I have never realized that there was SF wargaming, besides the usual D & D figures and such. All very interesting. I look forward to your posts!
Chuck