Armies for the Portable Wargame 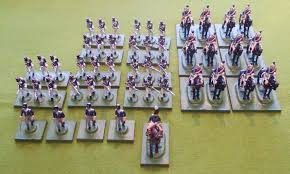 The Dutch Belgian contingent of Bob Cordery's humongous Del Prado Napoleonic collection. With infantry and cavalry units using two bases it is possible to represent formations on the table top. The multiple bases have a two inch frontage whilst the separate command figures use one inch. With thanks to Bob in advance for the use of the picture.

What with Spencer Smith ACWs and the French Foreign Legion I have been recently thinking about Bob Cordery’s Portable Wargame and how my planned armies will fit in with it. One of the great things about the system is of course the simple fact that armies do not need to be huge. In terms of the usual playing area for the rules in the past I tended to opt for a Command and Colours sized 13 x 9 grid. This was for when I used Hexon and also on the occasion when I dabbled with Heroscape. I no longer have the Hexon but I do have rather a lot of Heroscape which will be used in due course. For a square grid typically I use 12 x 8 or possibly 8 x 8 when the need arises.

During the long development process of the Portable Wargame via its various predecessors I often fought actions with my block armies. The actions I fought - all of which are in the games folder - varied in size in terms of the composition of forces. Usually it was an attacker vs defender scenario with the latter typically outnumbered. In terms of strength points the largest games tended to have around 45 to 48 for the attacker with the defender sometimes half of that. Working on the basis that a strength point equals a figure you can see straightaway that armies are, dare I say it, DBA-ish.

Taking the playing area I mentioned as a guide and using a 48 point army it is fair to say that the space will be a little on the crowded side when you remember that a single unit occupies a single grid area. Consider the following force:

This equals 14 units that will occupy 14 grid areas - so you can envisage the potential traffic jam and congestion. The sweet spot for me in terms of strength points tends to be around the two to three dozen mark which would translate into something like the following example:

The above force is 10 units strong which would fit rather more comfortably on the playing area with some space for manoeuvre.

I should point out the forces above are purely representational and naturally can be adapted to suit the particular army or even the tactical situation for the scenario being fought. Also, the above assumes that both forces are on the tabletop to begin with which is obviously not always the case.

A welcome twist to this is the new convention that Bob has demonstrated with his planned Portable Napoleonic Wargame book. He has adopted for his extensive collection of Del Prado Napoleonic figures a system whereby the figures do not directly represent strength points. In this an infantry unit is represented by two bases each of 3 figures, cavalry two bases each of two figures and the artillery a gun model and a base of two gunners. In effect this could be described as being 'one and half figures per strength point'. This looks better as the ‘units’ appear larger. The results of using this method can be seen on Bob’s blog. It occurred to me that this could be extended slightly further by allowing two figures per strength point so that a four strength point infantry units would have eight figures, a three point cavalry unit six figures whilst the artillery would have a gun and four gunners. One could base the figures in pairs and so the typical 4, 3 and 2 point infantry, cavalry and artillery standard would revert to losing a base of figures per strength point hit. As I recall I am pretty certain I have seen this style of basing used for American Civil War Command and Colours games being fought using a variant of the Battle Cry board game.

So what does all this mean in practical terms? I am rather taken with Bob's new basing convention and after having discussed this at length with him I have a far better understanding of the rationale behind it. The 'units' on the table have a little more presence and it is possible to represent formations at a simple level. The trade off is that markers or a roster would need to be employed when recording hits as for cavalry and infantry a single strength point loss does not equal a base of figures.

We used small (1/2") rubber bands draped over a figure in the unit to mark hits. The advantages are that they are relatively unobtrusive, they follow the unit as it moves, and involve no paperwork. We removed the entire unit (usually 3 stands of 3 figures for infantry) only after it broke, so that the stands still indicated its formation.

Sounds like a plan Dave! I could hear the cogs chugging as I was reading the post.

There are many ways of doing this and I have seen rubber bands being used before - as you rightly say they can be fairly unobtrusive. I rather like the idea of keeping units on the table until they have dissolved - you have given me something to think about!

I needed a lie down in a darkened room afterwards...

I had seen that thought what a simple idea! You can get these notes in a variety of colours as well so they could almost be camouflaged.

I have something in mind I will be using in any event for casualty markers.

I have a supply of the double sided travel Othello counters which are black one side and white the other. They are slightly smaller than a 5p piece so are not too obtrusive deployed on a base.

You can see them in use in some of my block based games.

You are starting me off on a journey here!

Beware the dark side....once you go down that path, forever, your destiny it will be....