"For the Glory of the Legion" 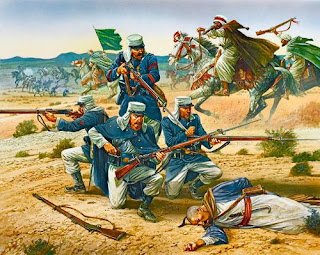 
The Colonial era (for the purposes of this post I mean the ‘Waterloo to Mons’ timeframe) is an extremely popular period for fighting battles with model soldiers and rightly so. The troop types are colourful, exotic even and there are tactical and operational challenges aplenty. Coupled with the availability of figures in every imaginable scale as well as an ever-increasing range of written material and dedicated rule sets it is easy to understand its popularity. I would also add the asymmetrical nature of most games – usually in terms of numbers engaged, weaponry and tactics employed and motivation.

It is probably safe to say that the big three periods for the Colonial scene within the timeframe mentioned are the Sudan, the Zulu Wars and possibly the NW Frontier.  This is very much a generalisation on my part and I have no desire to offend anyone that operates outside of these three. I have taken part in games from each period and have enjoyed them immensely but, aside from a very brief flirtation with 42mm figures for the Zulu War some years ago have never really mined the periods mentioned. For sure I have acquired and disposed of a number of books over the years but by and large have not really invested in them to any great extent. I have also gamed both the Zulu War and the NW Frontier using the block armies but other than that not a thing.

Whilst for the most part I have not really committed to anything in great detail  I have made a couple of forays into 54mm of all things for the NW Frontier and The Foreign Legion using  Armies in Plastic figures but both of these have fallen by the wayside – mainly because I would be unable to source many of the figures I would ideally need at a cost I would be prepared to pay.

With the advent of The Men Who Would be Kings I considered investing in a 28mm Foreign Legion set up but again was not thrilled with the prospect of 28mm figures although there are a good selection of available. With this in mind I quietly parked the idea – this is an important point as ‘something Colonial’ is not a new project as such; rather it is one that has been kicking around for some time (probably around 15 years or so as near as I can recall) but for the life of me I was unable to think about how best to tackle it. Fate however, stepped in to lend a hand and rescued the notion from the project backwater it was currently residing in.

I have a modest collection of books on the French Foreign Legion of which Martin Windrow’s excellent ‘Our Friends Beneath the Sands’ is the leading tome alongside a couple of his Osprey titles and the work by Douglas Porch on the Legion (more about him later). I was glancing through Martin Windrow’s superb history this weekend when I came across the section on Morocco which triggered a long forgotten memory. I have in my collection a book I acquired ages ago called ‘Lords of the Atlas: The Rise and Fall of the House of Glaoua 1893-1956’ by Gavin (Ring of Bright Water) Maxwell. I dug this out of a box that was destined for a local charity shop and am very pleased that I did. After a little further ‘Google Fu’ I discovered that Mr. Porch had also written books on the conquest of Morocco and the Sahara – both of which are now winging their way to me – so I would have plenty of background material to work with.

So where exactly, is all this leading? Well, I have mentioned that a Colonial set up is definitely on the cards and indeed, has been for some time. I am great admirer of Bob Cordery’s Sudan set up for a number of reasons, chief of which is that he has proved time and time again that one does not need huge resources and large armies to be able to fight very satisfying wargames. His collection, when used in conjunction with the Portable Wargame is fully in tune with how I want to run my games. All that was needed was a subject that could inspire me to take up the baton.

For a variety of reasons this will be in 15mm. The main reason for this is because I can make use of the extensive range of suitable figures from, of all people, Minifigs. There is sufficient variety of troop types for the French (I am thinking circa 1911/12) which are all suitably exotic not to mention the usefulness of the Berber tribesmen whole will provide the main opposition. Mention of the Berbers is important as these will also form a substantial part of the forces for the Sennusi when fighting the British in WW1 They could also fight alongside the Turks against the Italians in 1912 or indeed, against the Italians themselves, not to mention the Spanish during the Rif War. There is plenty of potential for a variety of games across the Colonial, Great war and Interwar period using what would be a unified rules system in the shape of the Portable Wargame. One could even consider escalating the Agadir Crisis and factor in the Germans as well – that would bring in the naval dimension, at least at the gunboat level. Crucially for me the amount of figures required will be relatively small and being Minifigs should be fairly to painless to paint – even for me!

Hope you checked out the new Strelets range about to be released.

I am also looking at Colonial but .. in 20mm plastic
Partly because of Strelets excellent 1/72 kits and Italeri re=releases

Check out the Arab Revolt Infantry, Arabs on Camels and Arabs on Horse
Italeri Aarbs (the Beau Gest Battle Set looks to die for)
It also spans into the Great War

I think I have the plastic bug ;)

I will certainly take a look as these as a 20mm option may work quite nicely - especially when you see the post from Geordie....

Now that is an alternative option for me to consider....

Just when I was about to place the order....

Also check out History of Wargaming Project : Evan Thomas' Small Wars
There is an excellent French Foreign Legion
One packet of Playing Cards, a sheet of paper and A pack of 20mm Arabs and French Foreign Legion (Arty and MG for other sources) and you are sorted for a night of fun

Many thanks for the links and very successful attempts to stoke my enthusiasm!

I was initially very excited about what you had led me to but fortunately I managed to swerve it.

Whilst the set is very nice and the figures therein look the part they are a real mish-mash of types - especially the 'Arabs'- and include Afghans, Bedouin, Berber and Mahdists in their ranks. Check out the review on the Plastic Soldier Review website and you will see what I mean. the Legion figures also have a few challenges in terms of details.

I would say the set is more Hollywood than historical but for all that it looks rather splendid!