Splicing the Mainbrace - Squared, not Hexed.... 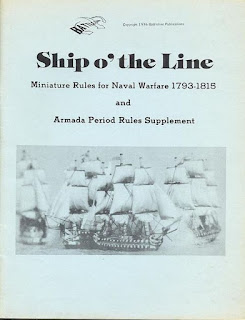 A real blast from the past but a superb set of rules devised by the late S. Craig Taylor. Sadly I now only own a PDF version of the rules without the Armada supplement (although I am pretty sure I could lay hold of a copy of the same).

Way back in the late 1970s and early 1980s I became interested in Napoleonic naval wargames, almost as an extension of my Airfix Napoleonic fixation that I moved to London with. My old friends Messrs. Fox and Hardman had already gamed the period extensively using a variety of rules with a selection of models that featured some early Navwar resin castings. The games looked really interesting and as I recall the period was in fact my very first taste of naval wargames. I cannot recall how it came about but amongst the three of us we landed on the set you see above - a set of square grid based naval rules that eventually morphed into the award winning hex based board game Wooden Ships and Iron Men by Avalon Hill. Actually the rules you see above came out after Wooden Ships and Iron Men but the original set predated the board game by some years - the BattleLine edition incorporated some ideas from the board game but stayed loyal to the square grid. 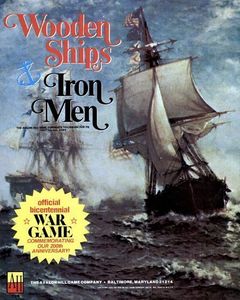 The award winning Avalon Hill game Wooden Ships and Iron Men. A great game but the square based miniatures rules are superior in my opinion - and that is coming from someone that has played both -  extensively!

The rules (currently out of print and have been for some time - there are some legal issues around who owns the rights to them) are detailed and feature plenty of charts and tables. The ship record cards used are also quite detailed and so you could be forgiven for thinking that they are somewhat over complex - especially when you compare them to the simplified version that became Wooden Ships and Iron Men.

Using the miniatures rules the denizens of the old Newham Wargames Club fought many actions both large and small including a rather large game at Present Arms that yours truly ruined due to a self inflicted injury....

I had started on a Russian navy of all things (I was building a Russian army at the time) and as I recall managed to get half a dozen or so models built and painted. Sadly by the time they were ready to use the club had moved on to the Armada period and I had moved away from the area.

Although we fought some very large actions using the original tabletop rules - before my injury we had planned to fight the Glorious First of June at the Present Arms wargames show - the rules were well able to cope with the numbers involved despite their apparent complexity. The same level of detail worked equally well for smaller actions.

The use of a square grid has a useful advantage for naval wargames (and indeed for land based versions as well) in that you can use the eight most common compass points. The rules allowed for diagonal movement and firing and this worked very nicely indeed. Having eight points of the compass to use for direction also allowed for more intricate movement without the need for a protractor or the appropriate measuring gauges.

Ship combat used a system of factors based on the broadside of the firing ship and modified for range, ammunition being used, target facing and crew quality. The firing ship would also specify if the ship was firing at the hull or the rigging. This procedure would yield a hit table number and so the appropriate table - hull or rigging - would be consulted and a pair of d6 rolled to ascertain the damage. The d6 used needed to be two different colours as the results were not added together but treated as a whole number. The range thus ran from 1,1 to 6,6.

All the usual pieces of chrome from the period - boarding, using full sail, firing from anchor, organising prize crews etc - were included as well as a brief summary of the major navies and names of the ships therein.

The grid size used was 1 1/2" squares for use with 1:1200th scale models, 3/4 " for smaller scales. For my own future purposes I am planning on using a 3" square - which should give you an idea of where this may be heading.

I really liked these rules and when I eventually get back into 'wind and water' Napoleonic naval gaming they will be my first choice to use.

Originally started with Navwar rules using using their resin castings we switched to WS&IM. Only later did we discover Ship O' the Line. We played these to death and I still have the models - somewhere.

I shall be doing something with them in due course at a squadron level and certainly not using GHQ or Rod Langtons models!

Having only played hex based rules with the Rejects I will take your word for it my friend.I do like naval wargaming as well!

From a gaming perspective naval actions can be ridiculously cheap to put together with the advantage of not needing a lot of terrain. I am really coming around to using squares rather than hexes and this set - which was originally written for squares - is really good. Sure they are quite 'table heavy' but they are easy enough to use and even writing orders is not much of a pain.

WS&IM is indeed excellent and I have spent many hours enjoying it, mostly on a gridded blue sheet with Navwar models sailing about upon its cotton seas. The only drawback with these rules is that they dont scale well about a small Squadron. More accurately, the rules do fine but I loose track of the details if each ship. As a rsult, for larger battles I go elsewhere but for small engagements these are my go-to rules of choice.

What scale models are you contemplating?

The funny thing is I was talking to a gaming chum about the very question of scale and for larger actions he is of the opinion that 1/2400th would be best. There is a very nice range available from Tumbling Dice in this scale that would be ideal - especially as one would not have to worry about rigging them - which now seems almost obligatory for larger scales and would certainly not be something I would fancy doing!

Oddly enough (and probably seems mad but then you know me!) I was thinking about scratch building some simple models at a larger scale or even pressing those Wiz Kids pirate ships into service.

In any event it is a way off yet but one thing is for sure - I will not be using Rod Langtons exquisite models!

I started with WS&IM as well, and we had many happy hours playing it before we began to realise that (i) hexes don't really work for sailing points and (ii) the rules made Crack and Elite crews so good that anyone who didn't have them was not really enjoying the game. So we moved on. We flirted with 'Heart of Oak' for a while which has a wonderfully complicated sailing system, but eventually settled on 'Form Line of Battle', a set capable of running decent-sized battles without too much pain, but which could be used for actions with one or two ships as well and still give an exciting game.

I have seen FLoB but have never used them although I have heard many good things about them.

The whole Crack/Elite thing in WSIM always felt too overdone compared to SoL which, as mentioned, in my opinion are a far superior set.

I keep looking at squares rather than hexes but it does not make me a bad person...

Hi David,
It's been an enjoyable experience following your recent posts developing your ideas on gridded/portable wargames, it has given me much to think about. I'm trying to find that balance between C&C rules and model soldiers and with my 40mm Napoleonics I'm at a bit of a loss how to proceed, the more I read posts such as yours (and of course Bob C and Ross Mc) the more I know I don't want to go back down the 'conventional' route. I'm currently working in the background replacing all of the blocks from C&CN with individual 15mm figures with the intention of playing on the board. I think that's really where I'm at right now, can't go back down the terrain building route, but rather small portable games that can be played on the dining table and quickly set up and packed away again afterwards.

To return to the subject of this post I have always liked the idea of Napoleonic Naval wargames, but never played any of the above rules you mention. Last year I invested in 'Sails of Glory' and a couple of extra ship models, but as yet I have not played a game, I think because the so called 'control panel' is too complex for a fun game, for me at least. That and hundreds of cardboard chits that are used to record damage. I might have to give it a go though at some point, the supplied model ships really are very nice indeed - I'm sure you have seen them - I think they were the main reason I invested in the game. I added HMS Victory at the daft cost of £30.00 just because it's such a lovely model! I think what I'm trying to say here is that there is no reason why I can't use the models to explore other naval rules such as those mentioned above.

What is it about 'control panels' that are so popular nowdays? What was wrong with a simple damage record sheet that one simply marked off. Don't get me going on the Lardies 'Oh What a tanker' rules, another control panel game that just seems to me to be so unnecessary as a means of simulating tank on tank action!

Thanks for stimulating the old brainbox David, sorry for the rant.

I have a rather long response to send you - could you email me on roguejedi@btinternet.com

I look forward to hearing from you!

I would be very interested in your response to Lee. If you don't feel that you could post it on your blog, would you mind including me in your email? stewartwt at g mail dot com

Happy to do so once 'Lee has contacted me. It is nothing contentious - just rather long!