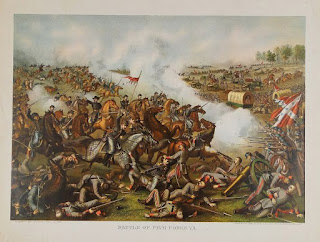 Kurz and Allison - The Battle of Five Forks

I have at last got my small order to Navwar in the post which means that work on the stalled WW2 North Atlantic naval project can resume once the models arrive. I shall be pleased to get this off the paint tray as it has dragged on for longer than I would have liked. Changing my mind about the models to use (if you recall it was a destroyer related issue - the models are too large) midway through the first batch did not help, neither did the summer heatwave!

I have made enquiries about the models I shall be using for my Portable North African Wargame and so expect to start acquiring material for this shortly. Initially it will be the Legion and the Berbers but phase two will see the addition of the British and some Turkish advisers for the Sanussi revolt during the Great War. This will give me a good excuse to get some Rolls Royce Armoured Cars! The beauty of this project is that, in true Portable Wargame style, will be pretty compact in terms of the amount of material I will be need.

For a variety of reasons I shall not be pursuing this. The figures I shall be getting which are from the classic ACW range will instead be used as intended - in other words they will be used for the ACW.
I shall still be organising them using Charge! as a guide and with figures based individually. I will also use the wonderful Kurz and Allison prints as my painting guide so expect a suitably garish (and glossy) old school toy soldier vibe with them! I shall use the armies with a variety of rule sets with the Neil Thomas 19th Century set added to the Portable Wargame, Charge! or even Battle Cry as the mood takes me.

I have opted to do this simply because the variety of troop types for the Balkans is much larger than the Spencer Smith range can readily cope with.

The naval dimension in support of this project will be scratch built and the plan is to have generic looking models that will fit on to a 5.5" (across the flat sides) hex. This means they can be slightly larger than my previous models. I also intend painting these in what I would describe as an old toy soldier style so clean and tidy and stylised.

The Grand Duchy of Artois and the Electorate of Kronenbourg will appear in due course but in their 18th century plumage - as I originally intended.

I use the Spencer Smith ACW with the Featherstone rules from his first book , 20 figures to the unit .

Looking forward to the first AAR ;)

Would this be for he famous Plattville Valley action? The rules are available as a PDF from Spencer Smith. Do you still have your armies for this?

Those illustrations are lovely, as used on the cover of Battles and Leaders 4 volumes if I recall? I can certainly see how inspirational they could be for an ACW project using the Spencer Smith figures.

You are quite correct about Battles and Leaders. The images are are really inspiring and toy soldier like and as you rightly say, ideal Spencer Smith territory. There are a couple of books featuring the entire collection of Kurz and Allison prints which I have been dropping large hints about for my birthday later this month!

I am really looking forward to this and am keen to get started but first I must finish the WW2 ships.

Yes I've got my ACW Spencer Smith if you look on my blog under OS ACW there a battle report I think .

Very nice indeed! My own set up will not be as large. I liked the terrain you use - simple, effective and very old school.

Many thanks for sharing.