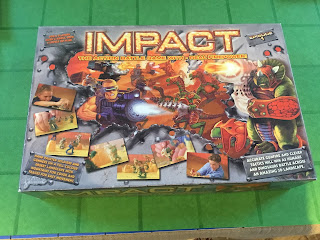 H.G.Wells meets Jurassic Park - as I recall I think this cost me 50p or so at a boot sale a long time ago in a galaxy far, far away....

I am a long standing science fiction and science fantasy fan. I have fought numerous skirmish level games  using 28mm figures although not for some time - the last outing was playing Space Hulk as I recall - and it a genre I am always looking to dabble once again in. I recently acquired the base game of Star Saga by Mantic Games and this represented a really good investment even if I only use the bits and pieces contained therein. The figures are lovely and I have seen some truly wonderful paint jobs on the net. I will get to them at some point for in the short term I wanted something more immediately available.

Enter stage left - IMPACT! I picked this game up at a boot sale a few years ago solely for the figures and terrain pieces that come with it. The basic game has a unit of human troops fighting an invading force of sentient and well equipped vaguely humanoid dinosaur types. Both sides have commanders, troopers and an assortment of heavy weapons - which fire missiles a la H.G.Wells. The figures are painted and are made from this rubberised plastic material - reminiscent of that used for the Axis and Allies warships from the collectible miniatures game. 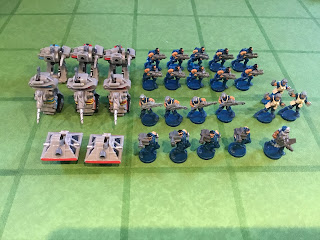 The Human troops - I added to both sets of figures via eBay so there two of the base game and one from Wolf Ridge expansion set. They are not the best figures but they will suffice for what I have in mind. 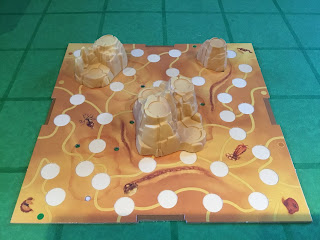 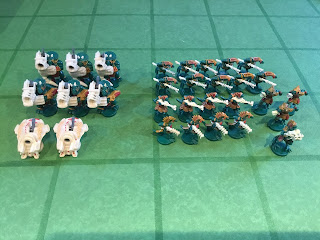 The sentient dinosaurs (sounds like a rock band!) - the heavy weapon types are very Triceratops looking and the weapons are very biologically styled, rather like those of GW’s Tyrannids

With the best will in the world I would not use the figures as they are currently adorned - and coming from someone that can best be described as a reluctant figure painter - but I reckon that even I could have a good go at these figures! My plan is simple - I will base the figures and repaint them into something a little more appropriate. The only downside is that in basing them they will not fit into the firing steps on the various pieces of terrain you see - they are 19mm across - that comes with the game. No matter, I am sure I can manage to disguise the holes with some filler etc! 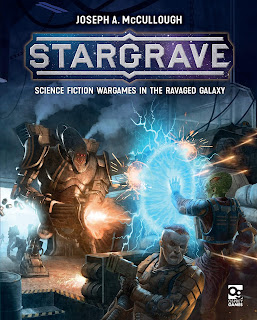 Stargrave from the same stable as Frostgrave - I am really looking forward to this!

I want to use the figures with Galactic Heroes and also Stargrave (think Frostgrave with technology) when  it is released. It will certainly be something different in any event.

When I saw the terrain boards and hills, my mind went into overdrive when I stared to think of ways they could be used ... and not for the original game!

You’ve certainly given me something to think about!

I had a feeling you might have a few ideas!

Looking very retro David...
Will you still be firing missiles at them...

I sense a strong wargames butterfly in you... 😁🦋🦋🦋

I wonder what a wargames butterfly convention would be like?

It will be a small diversion and no, the missiles will be absent!

I have been described as a wargaming butterfly and this is a good example of that....:-)

The nearest thing I can think of to a wargaming butterfly convention would probably be Salute!

I think maybe a show with more traders than punters...😁

And a dreadful venue with the only saving grace being the size of he place.