“I can't believe my ears. You all stand before me, waving a piece of paper, crying 'abdicate, abdicate!' I WILL NOT! I WILL NOT, NOT, NOT!” (A similar scene played out at Number 10 Downing Street earlier in the week methinks….)
A thought occurred to me after the blog post before last concerning the Battle of Waterloo. Some years ago I owned a copy of the third edition of Columbia Games Napoleon - a block based game covering the Waterloo campaign. The game was organised at division level meaning that there was a block per divisional level formation or for smaller formations combined for ease of play. It was huge fun and when a battle arose from the map movement the blocks involved were transferred to a battle board to resolve combat. Anyway, to cut a long story short, I drew up a roster based on the order of battle contained in the game with a view to gaming the campaign at some point, probably using my block armies. My thinking was to use a block per strength point so in effect a typical infantry division would have 3 or 4 blocks. It was all good fun planning this but for one reason or another it never got off the ground.
A quick glance at the order of battle and immediately the Portable Napoleonic Wargame suddenly looms large!
Sadly the electronic version of the file has long gone so the sole printed copy I have is all that remains but I figured that posting the pictures of the same would at least make it available to anyone that would be interested. I may yet get around to using these as intended - I had this fanciful notion of drawing up a 6ft by 4ft map of the campaign area and taking it from there. Something for my retirement I think! 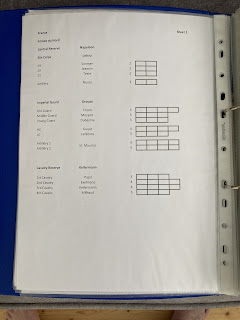 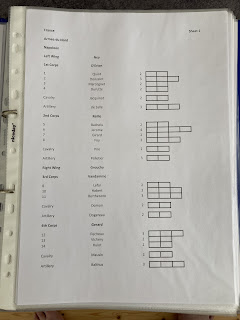 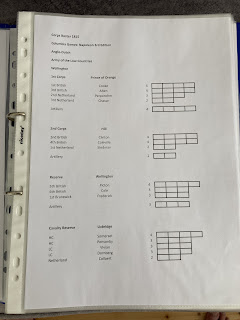 Anglo-Dutch Army of the Low Countries 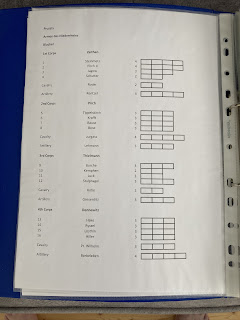 Prussian Armee Des Niederrheins
I may get around to this rather ambitious undertaking at some point but there are no immediate plans to do so. There is something about moving units around on a map that taps in to the inner commander in us all in a way that figures or models never can - at least that is what I believe and it was part of the rationale behind my block armies.
One day perhaps.
Posted by David Crook at 14:41

I have that game, and the earlier version where the blocks represent roughly corps sized units. Its a great game, but not as good solo since there's no surprise factor. It's influenced a lot of my portable wargames, and especially 3x3. I recommend it, but it's gotten a bit expensive now.

Any game from overseas is expensive as shipping is a killer - and then there is the inevitable customs bill as well.

It is a great game and I always wanted to play it with three players. I am not as keen on the 4th edition though - it looks nicer but at the cost of reducing the order of battle.

The 100 Days as a map game with figures is a concept I find compelling. I have read the thing done before on the Murdock's Marauders blog, May 2017:
http://murdocksmarauders.blogspot.com/2017/05/hundred-days.html
The article is tantalisingly brief, and not a gridded game, but indicates the thing is feasible.
Cheers,
Ion

That game sounds familiar - I think my good friend 'Liverpool Dave' has it, and we have played it a few years ago. I agree the battles could easily be transferred to the table, and the Portable Wargame could be just the thing!

Moving blocks on a map was they way they were invented to be used -- not that you have to do it that way, but I think they, at least, look best on a map.

Islandia is a strange novel -- it takes a while to get into it, but once you've finished it -- you've been to Islandia. It's been in print for all these years, but maybe in Britain it is in the public domain -- you don't have Disney dictating copyright laws like we do on this side of the pond.

I very much enjoyed the picture fest on the link you sent - many thanks indeed! Years ago I managed to acquire stylised armies in 15mm based on the formation blocks contained in the game. I used 40mm square figure bases with 6 foot, 3 mounted or a gun and two crew and the plan was to attempt something similar but instead I used a set of rules published by Chipco called Le Petit Empereur. It was all great fun but short lived - the collection is long gone and now lives in France.

Using figures does look great although it would be unlikely for me to do so! Methinks I will stick with my blocks….

Moving blocks around on a map certainly feels suitably ‘commanding’ and I believe that it helps to ensure that the commanders have their eye on the overall picture rather than worrying about the fate of individual units. I guess that is how it should be!

My daughter subscribes to Disney and I was staggered by how much material there is to view available on their service so I can see something of what you mean!

You are absolutely right about the Portable Wargame being a good shout for something like this! Aside from drafting a map it would be pretty straightforward to organise but for now time is very much against me.