The Balkan Wars....Redux - With a Dash of Gallic Whimsy 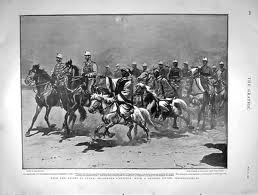 French Chasseurs D'Afrique - a possible addition?
A while back I posted a number of blog entries devoted to my intentions surrounding the Balkan Wars. If you recall the plan was originally going to be the acquisition of forces for a hypothetical 1900 set for both land and sea. Events however, have moved on and so I then decided to revert to the more usual and historical 1912 variant. This is the current state of my thinking and so I am now working towards the completion of the appropriate armies for 1912.

You could be forgiven that this seems perfectly straightforward and, dare I say it, normal....

However, what passes for normality in the Crook universe is often at odds with the real world and so, unsurprisingly perhaps, I am considering my own unique twist on war of 1912.

I will be including representative forces, both land and sea, for a selection of the Great Powers.

I don't know why I didn't think of this before as I was certainly going to do this with the abandoned 1900 project. The plan then is quite simple and in fact looks little different to how I am tackling the project in actuality. I will get the three Balkan armies completed over the second half of the year - the Turks, Bulgarians and the Greeks - and will then add on a 'drip feed' (that is one at a time) basis those Great Powers that take my fancy.

I fully intend that both land and naval aspects will be represented and the only casualty of this slight change is that I shall not be scratch building the Balkan fleets now as I already have these in 1/3000th and any new naval additions will need to be in that scale for consistency.

I have already decided that any Great Power additions on the land side will be in effect Colonial type overseas service troops thereby ensuring that limited nature of their size is correctly represented - it also gives me a very good excuse to indulge in some 'exotic' troop types!

For reasons that will become obvious my first foray into Great Power territory will probably be the French - simply because I shall be tackling a 1/3000th navy for them at some point. The choice of overseas troops for the French is huge and suitably exotic and will doubtless include elements of La Legion as well as any of the cavalry types including the famous Chasseurs D'Afrique.

It is dearly to be wished that any wargamer increase his store of troops with red trousers.

I like to think of it as 'adding a little tone to what would otherwise be a vulgar brawl'...

DC (not wearing any red trousers at the moment!)