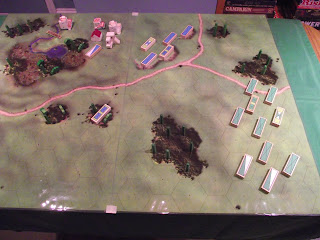 Keder Sirt - the initial dispositions with the Rusland forces deployed on the right in green and the Fezian forces on the left in blue.
Having gone some way towards setting the scene for the action between Fezia and Rusland the next stage is of course to fight the battle. The picture above is of the initial dispositions of both forces deployed on a pair of Axis and Allies maps with some Town in a Bag trees and some of my Greek style buildings. The terrain is is very much an improvisation - Hexon will my preferred choice going forward -  but I am very satisfied with the approach I have adopted and the the all important 'look' of the thing  I must confess I am quite pleased with the end result and am looking forward to fighting the battle on Wednesday evening.

The Rusland forces (naturally in green) are deployed on the right of the map with the Fezian defenders on the ridge of Keder Sirt with the small village in the rear of the position and with the fortress set further back. From the dispositions the plans of the respective commanders can readily be discerned.

I must apologise for the quality of the picture - the maps are laminated and so I had to photograph the set up without a flash because of the reflected glare. Once I get my Hexon terrain properly configured then the photography will be far easier as the flock absorbs the flash to an extent.

Roll on Wednesday evening!
Posted by David Crook at 22:35

I am impressed with that laminated map :)

I have to admit that is looking a bit intriguing, especially as I seem to be rubbish at painting a multitude of humanoid miniatures. The hex grid is nice.

I had the maps laminated because they are printed on paper and would probably have not lasted 5 minutes otherwise! The only drawback is the high gloss finish as it plays havoc with any attempt and being photographed.

They are really handy to have around though and they are also double sided.

I am a very s-l-o-w and unenthusiastic painter of organic subjects so using the wooden blocks seemed like a good away of allowing me to indulge in a whole host of different periods with little effort other than research. In a sense all I have done is to make a kind of 3d battle map or boardgame and the end result looks perfectly acceptable.

Once I have my Hexon terrain collection finished the effect will look even better.

The block armies are also very cheap to produce - all you need is some blocks, a colour printer and some sticky labels!

I must admit that I had not realised on first glance that the terrain was NOT 3D! It looks very impressive indeed, and the 'blocks' look so professional that they could easily pass for pieces from a commercially-made wargame.

You seem to have got all the elements right … and I look forward to reading your battle report later this week.

The overhead view is wonderful. It looks great!

The maps do indeed look 3d at first glance. And second glance. I know the laminating is a bugger to photograph but it still looks good. I have found that Hexon photographs very well - even with flash.

I am really pleased at how well it looks and when it on Hexon it will look even better! The blocks were great fun to put together and I still have khaki set to label. I was worried about how they would photograph but they seem fine.

Thank you for your generous comments - much appreciated as ever.

Cheers old chap - and not a snow flake in sight!

I am really looking forward to getting the Hexon terrain properly finished (I still have a few pieces to acquire) and then it will look even better although it is not too bad at the moment!

I have also a laminated set of the sea maps for Axis and Allies: War at Sea which are useful for 1/3000th models.

I really want to finish the Hexon set up though.

Looking good. I'd be interested to see how it turns out.

All the best and regards to Sir Harry,