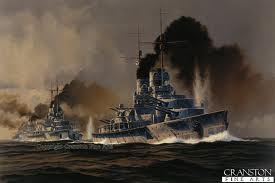 SMS Lutzow opens fire at Jutland
I have spent the past couple of days trawling through ship specifications for the latest version of the Portable Naval War Game and can safely say it has actually been quite a therapeutic experience. I have various fleet lists so it has been merely a case to setting up new column headings and translating some of the data into the new format. The occasional foray into either Conways or Janes completes the process where any clarification is needed. As usual I have started with the Royal Navy and followed this with the Germans - mainly because their fleets were the largest.

It did throw up a single anomaly though that I have had to address with the rules; that and a minor clarification.

Basically guns are rated as heavy, medium and light and these have maximum ranges of 6, 4 and 3 hexes respectively (remember my models are 1/3000th and the rules are designed for use on a hex grid surface). I wanted the maximum range (6) reserved for dreadnought type ships so the pre dreadnoughts should only be able to reach to around  two thirds of this i.e. 4 hexes. Rating these earlier guns as heavy was okay as far as the shell weight was concerned but the range was wrong (although there were exceptions historically as the Goeben experienced in the Black Sea). What I have decided therefore is to allow for guns to be rated by weight and range. For the most part the system in use is fine and so guns rated at whatever weight will have the corresponding range but for the exceptions will now have a split rating e.g 1 H/M means a ship has 1 heavy (H) gun dice with a maximum range of medium (M) or 4 hexes.

The clarification refers to the Close Range Attack procedure. I had forgotten to allow for the effects or torpedoes from ships other than destroyers. What I have settled on is to allow any ship other than a destroyer when launching a Close Range Attack and then successfully hitting the target to roll a single d6 for torpedo based damage. It is not hugely effective although more so against older ships.

I will be making the rules available to anybody that is interested but I want to complete the ship specifications first of all and also to run another couple of games. I am not expecting this to be much longer and so all should be done and dusted in the next couple of weeks or so.
Posted by David Crook at 06:15

Stick with it David, nearly there...the anticipation of getting it onto the table with another cracking AAR please...sounds as though you are pretty happy with progess so more power to your rule-writing elbow...!

It has been a long, long journey and no mistake! I have learned a lot about rule writing and hope that the rules generate many more AAR in the years to come.

Damn the torpedoes. Full speed ahead!

The torpedoes have been duly damned and the speed is always full ahead - I am really close to completion now which is always a good thing.