A Matter of Size 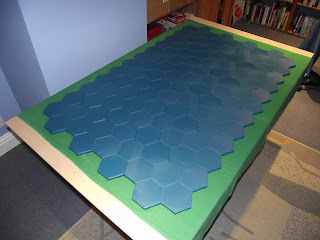 The new playing area - I use a cloth under the tiles as it stops them sliding around at inconvenient moments!
You may recall a short while ago I acquired a secondhand drop leaf dining table which, when fully deployed, measured roughly 60 by 30 inches. The size is sufficient for a Hexon playing area of 13 by 8 - which is roughly the size of a Portable Wargame battlefield and a half (i.e. 12 by 8). Obviously this is not carved in stone but as a benchmark to work from it is certainly as good as any. My original plan for the use of my Hexon was to set up a 13 by 9 playing area - the same size as the board used in Battle Cry and Memoir 44.

The 13 x 8 set up is absolutely fine for use with land actions but is a little narrow when used for naval battles. This was not a major problem but it did give me pause for thought.

You know how it is - something niggles for no discernible reason (I was happy with the original size after all) - and eventually you just have to do something about it!

I visited a local timber yard and acquired an MDF off cut (medium density fibreboard for those unfamiliar with the term MDF) sized at 60 by 36 inches and it has made a world of difference - well, an extra row of tiles difference in any event. I can at last set up my Hexon to the size that I wanted to originally i.e. 13 x 9. This will give me greater area for deployment for land actions and for the essential sea room for my naval battles. It also means I could easily translate Battle Cry and Memoir 44 scenarios onto the tabletop should I wish to at some point.

I heartily endorse this course of action...

Looks good. Gives you a place to set your glass!

It feels a whole bigger than previously and so possibly even some C and C Napoleonics may see the light of day on the green version I have.

I am really pleased with set up I have - if only because it means I have some space to think as well.

It seems to make lot of difference - far more than I would have imagined!

I have several places for that most important of wargaming functions!

"A willing foe, and sea-room" - the Naval toast for Fridays, and every day in DC's Man Cave!

I'll drink to that!

That's about the same size as my own table, so it must be right!

That is the source of much relief! Seriously though, it is really good size and when I eventually get back to the Punic wars I shall be using it for ancients as well...;-)