Fezia and Rusland, The Balkan Wars and that Groundhog Day Moment....

That Groundhog Day moment - Where did I put that Irregular Miniatures catalogue? 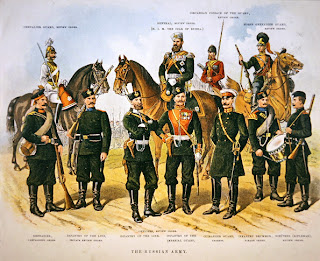 The Rusland, sorry Russian Army of 1890
One day I will learn to make up my mind and stick with it. To be fair I am probably not as bad as I was in my early years but I still have the capacity to occasionally swing wildly between ideas. The sole redeeming feature of this is that the number of hobby related financial disasters has diminished somewhat over the course of time or perhaps I now have a more realistic appraisal of what is viable and what is less so in monetary terms.

I am not going to use the Perry Plastics for my Fezian and Rusland armies. There, I've said it. I will use them for that which they were intended  - i.e. a long term 28mm plastic ACW project - in due course but for a variety of reasons I shall have to abandon my original plan.

The alternative is so blindingly obvious I am still wondering how on earth I managed to completely overlook it. I am going to use the Irregular Miniatures 15mm Balkan War Turkish and Bulgarian armies I have. If you recall I acquired these more of less when they were first released (see the following: Irregular Miniatures Balkan war) TWO YEARS AGO (oh the shame!) but never really did anything with them - other than to discover that the Bulgarian infantryman was in fact wearing the earlier uniform (earlier than 1912 that is) and so was not really suitable. It could have been mixed with figures correctly attired except for the fact that Irregular did make them and so they were consigned to the cupboard and were going to be ignominiously disposed of. However, by dint of some casual research I was able to discover that the Russian army of 1890 was dressed more or less identically to the offending Bulgarian and so I thought - why not? This means then the the Bulgarian Balkan Wars army will in fact be painted as Russian (in 15mm the uniform differences are easily addressed with some painting - the woollen leggings used by many Bulgarians can easily be painted as black boots). In effect then, I will have a pair of historical armies being used as 'imagi-nations.


There are a number of reasons why this is a no-brainer.


The figures will be organised as per the Charge! based set up I had planned for the 28mms and they will based individually. I have a number of reasons for this but rules versatility is the most compelling.
Besides, I have two unopened tins of the old Humbrol Autheticolour Rifle Green and it would be a shame not to use them!
Posted by David Crook at 06:04

Isn't memory great when it works! Not only will you save money with this approach but I suspect it will all get on the battlefield quicker, even if you do get side tracked.

Enjoying your blog
Thanks

I can certainly agree with the first and last point you made but knowing my sloth like painting speed the second point may take a little longer to realise!

Many thanks for the kind comment re the blog. I hope to carry on with this for as long as I able to.

Sounds like a solid fall back position. There is a reason for keeping stuff around, and benefits from exploring options hands on.

If painting is a chore, have you considered a 1/2 way step between the blocks and painted miniatures? This would be a reflection of old American/Marx plastic toy soldier playset heritage and also of various boardgames, that is to say, paint one side Green (or White) and the other Blue (or Red).

I have been conducting a series of experiments around using figures at table distances and the results are really interesting. Most figures at three or four feet tend to have the main colours discernible but not much else. The Irregular 15s remind me of Peter Laing to a degree in that much of the detail is implied rather than stated. For the two armies I intend exploring that concept fully and so much detail will disappear. As the overall uniforms are dark blue and dark green with black leatherwork this will not be a problem - even for me!

Work on the naval rules is underway for 1860 to 1890 as well and so i am busy repairing and painting river warships.