Galleys in the 16th Century 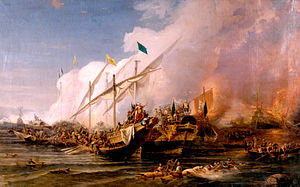 As regular readers of this blog will no doubt be aware I am very interested in the history of the Ottoman Turks. It is also fair to say that the 'golden age' of their efforts and achievements was probably from the fall of Constantinople in 1453 to around 1650 at a stretch. The sixteenth century was probably the best of this - and one could argue that only under Sulieman the Magnificent was this true. In fact, after his death the empire went into a long and protracted decline but that is not really the object of this post. I have long desired to game with an Ottoman army or navy when it was a force that was taken seriously on the global stage and so the sixteenth century would seem to be the best time to consider this.

In the sixteenth century, the war at sea in the Mediterranean was dominated by the galley. True, they often carried guns and routinely used slaves/captives/convisted crminals for the propulsion but essentially the tactics were little removed from that of the ancients - except that the ram was more likely to be a close range forward firing salvo of cannon fire followed by a boarding. In fact the ram was not a ram at all, more like a spur to sink into the opponents upper works thereby forming a boarding bridge of sorts. It was deemed better to capture ships than to sink them. Gunpowder had made the biggest difference though - both from the point of view of ship-borne artillery and that of personal firearms.

I have many ideas in connection with how I want to tackle this (although not immediately - I have far too many things to do in the interim) and once again, Navwar will be the supplier of choice for the ships I shall be needing in due course. As with the ancient galley period, I have a small but fairly complete selection of books on the period so when I eventually tackle it I will not be short of inspiration.

On the subject of inspiration, the following battle looks like it might be fun to have a go at it in due course - and no, it is not Lepanto!

This also has the added attraction (for me in any event) of having been fought on my birthday - 28th September. Now I wonder if I could set myself the challenge of readying the models for both sides in order to attempt a refight of this action to coincide with my Birthday later this year?

Mmmm, much to ponder here methinks....

I'm looking forward to seeing how this progresses - and the ancient naval as well. Not like I need another project but aw heck why not!

I always planned to tackle the galleys of the 16th century at some point and so following the ancients would seem logical.

For me then, this is not a new project, just the extension of an existing one!