Egging Myself on over Easter....Part 3 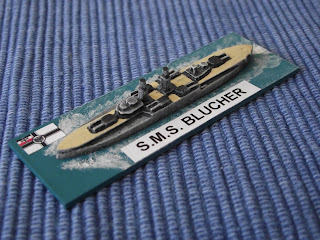 It has been a busy bank holiday weekend and to be honest, I am surprised that I have been able to get as much done as I have. Aside from various shopping trips we also had friends over for lunch on Sunday which was great. A roast leg of lamb the size of the Isle of Wight and several bottles of wine later I decided that perhaps painting 1/2400th scale ship models would not be such a great idea after all....

As mentioned in a previous post, the typed up special abilities for Angels 20/Bandits High have been passed over to Mr Fox and he has spent some time looking over my assessments of the same. Happily we seem to agree over most of my classifications and so the next stage will be to 'drill down' into applying these in a more logical fashion by type and pilot. This will not be a difficult task but it will take some time but will really make a difference when completed. 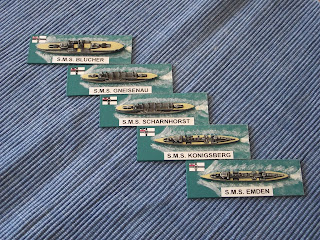 The new German additions - SMS Blucher, SMS Scharhorst and Gneisenau and two of the later Konigsberg class - Konigsberg and Emden

The biggest news though is that I have completed the 16 cruisers destined for Fezia, Rusland and Germany. Five of these are for Germany - Blucher, Scharnhorst, Gneisenau and a pair of the 'Konigsberg 2' class light cruisers. Seven are for Fezia and the remaining four are going to Rusland. Of the models used the Blucher, Scharnhorst and Kongsberg were all from Stonewall whilst the Nymphe and the assorted Giuseppe Garibaldi types were all from Viking Forge. I have to say that the Blucher is not a great casting and by far the worst of the lot is the Scharnhorst - it is truly grim! The overall outline is OK but there is little or no detail to speak of and so the paint job is very much a triumph of hope rather than expectation! The Konigsberg is a lovely model though; as are all the Viking Forge castings. The latter has a nice level of surface detail that catches the brush really well when highlighting and drybrushing. 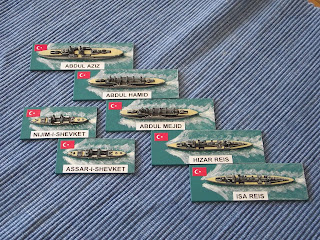 I was rather pleased with how the four Garibaldi type cruisers came out and It has made me think very seriously about using either Viking Forge or C in C to a/ replace the duff castings of the Scharnhorst and b/ to fill the gaps in the ranges available from Stonewall. Either way though, this will have to wait until I am in gainful employment once again and the coffers are restocked! 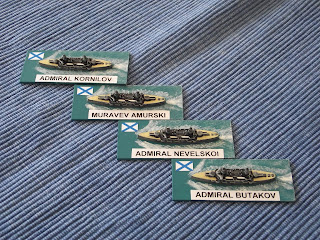 Of the three things I wanted to get done over the long weekend I have managed to tackle two of them which is not bad really. The fleets are growing rapidly in terms of what is available to use - especially those of Fezia and Rusland - and the air stuff has had a big chunk of the donkey work addressed. I missed out on a game but will be rectifying that over the next few days as well as assembling and painting the sixteen assorted pre-dreadnoughts I have for both Fezia and Rusland. Each side will have four old coastal defence types and four modern mainstream battleships. Once these have been completed the dreadnoughts will follow although I shall first of all want to tackle some back filling of the Royal Navy and the High Sea Fleet. 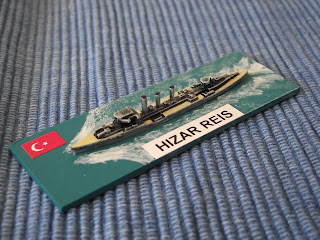 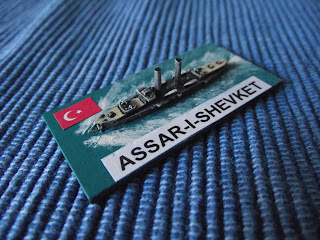 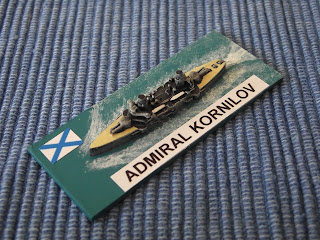 Such gorgeous ships - you've done a cracking job there (as ever) DC!

Once again you have me in a quandary about my VSF fleets and the scale to use. The attraction of having the same scale as Aeronefs for integrated battles is hard to beat though, despite the extra price and reduced ranges

Cheers old chap! the whole scale thing is a tricky one but as you would be looking down at the sea through the nefs using a smaller scale would be OK in my opinion. Aside from using Navwar 1/1200th ACW models you are stuck for choice although certain of the Axis and Allies War at Sea models (1/1800th)could be useful - they produce a very nice Schleswig-Holstein pre dreadnought and the Georgios Averoff.

I'm looking forward to seeing another play test of your rules with all these new toys.

Thanks old chap! I am planning on another rules run out over the next few days and needless to say both Fezia and Rusland will be using their new additions.

I should point out that the rules I am using started life as Bob Corderys - all I have done is to, ahem, tweak them....;-)

"Standing on the shoulders of giants" is the expression that springs to mind!

Things a re progressing at a good pace. Looks like we'll be seeing some hostile actions soon.

I hav a plan for an action which will appear in the next few days all being well and needless to say, the new ships (well at least some of them)will be featuring.

Ships look good, I have been following Fezia and Russland for a while. I can see I will need to consider the Viking Forge stuff when I get an urge for another fleet or two ... er ... after I finish the several large fleets I already have of course :-)

Cheers old chap! Fezia and Rusland are long time enemies and so the scope for naval games old and new is huge! I am currently working on four fleets but have plans for a number of others in different periods.

The VF models are very nice and take my new painting technique very well which is a bonus!

Interesting Naval theme or meme is at play here

Synchronicity in action perhaps? The Stonewall casting of the Scharnhorst is really not that great - it fact, it looks worse every time I see it!

It will be replaced with something better in due course.