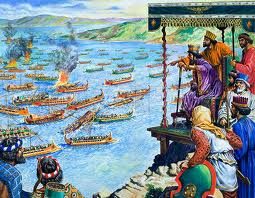 The Persian King of Kings surveys the action at Salamis

In my recent post on Ancient Naval Warfare Rules I mentioned the old WRG fleet action set and the 'cut down' version of the same that appeared in the book Salamis by Richard Nelson. Essentially these rules have been doctored to suit the battle of Salamis but in my view would suffice for the actions fought during the entire campaign.There is but a single ship type considered - the trireme - although these are of varied effect and usage depending on the nationality represented. As far as I am able to ascertain the only other type of fighting ship that could have been involved in the campaign is the smaller pentekonter so these should be added into the order of battle as being representative of some of the smaller contingents involved.

My plan at this stage is to extract the tactical rules from Richard Nelson's book and type them up for use as a standalone rule set. Whilst the models are being readied I will also have to give some thought to a hexed playing surface with hexes around 1 1/2" to 2" across the flat sides although I could make use of Heroscape tiles in the short term.

My collection of models for this period as it stands at present for this campaign consists of eight Phonecian triremes (they have built up sides compared to the traditional version), eighteen conventional triremes and eight pentekonters. I want to increase these to 12, 24 and 12 respectively so this will give me a reasonable number to play around with for various rule sets.

The big attraction for me with the whole idea of warfare under oars in this period is the conflict between the boarding and the ramming school. One side wants to get close to board whilst the other does not - instead they want to drive a nice neat little hole in the side to sink the ship in question.

As projects go this is very self-contained and I have most of what I will need readily to hand. Once the current batch of pre dreadnought coastal defence battleships are completed I can then give this my undivided attention - with some Command and Colours: Ancients land battles in support using the new Spartans expansion for the Hoplites and the other elements from the Eastern Empires set. Assuming all goes well with this project I will then give some thought to the later Punic wars on a similar basis as I have the nucleus of a set up with some galleys for both sides. The aforementioned Command and Colours game has the Carthaginians and Republican Romans in the base game as well so that will add another dimension for me to explore. The number of ships available for this particular project will need bolstering however, but that will the worry for another day.