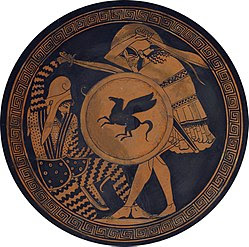 At the back end of last year I acquired a huge selection of blocks from the Command and Colours Ancients game from Tim Gow. The blocks were from each of the expansion sets to which I added the final expansion set number six - The Spartans. After having labelled each of the sets and stored them in six boxes they have sat on the shelf awaiting some inspiration on my part.

Last Wednesday night at the club we ran a small test of the rules which was only partially successful (it was not finished and inevitably some things were incorrect - nothing whatsoever to do with the fact I was being slaughtered  when we packed up for the evening!) but what it has done is to ignite the slow burner of ideas for this year.

As I have this huge selection of blocks for use you could be forgiven for thinking that I would be spoilt for choice as to what to 'do' first - Punic Wars, Macedonian adventures, Greeks and Persians, Romans of various sorts or barbarians by the yard. This would usually be my dilemma but his time, rather uncharacteristically (at least for me anyway) I have an instant plan in mind - and it is also one that I have mooted previously.

The Persian invasion of Greece which included the 300 Spartans, Salamis and the dust up at Plataea has long been of interest to me and with the blocks available I certainly have more than sufficient material to fight the land actions thereof. The final expansion set covering the Spartans also tackled the nuances of Hoplite warfare and so is far more representative than the original game. Obviously this is of prime consideration when gaming with an army primarily composed of Hoplites of various quality!

I am also in posssession of a small collection of Navwar 1/1200th scale ancient galleys as well as some really good reference material on naval warfare in the period so fighting the war afloat would not be too difficult to organise. I reckon that another dozen or so packs of ships (Navwar triremes are two to a pack) will be more than sufficient for my needs and would be good fun to paint up. Rod Langton has some lovely resin 1/1200th scale terrain pieces that would be useful (bear in mind that most naval battles of the era were invariably near the shore) and so i reckon that this is a very viable mini project.

Richard Nelson's book on Salamis contains a fast play set of rules based upon his WRG Fleet Action set that would serve for  a good game - he has also scaled the fleets at Salamis down to a grand total of a little under 60 models all in - and at this stage all I would need would be a suitable hexed playing surface to use them. Hexon is too large for the models as a 1/1200th trireme looks a little lost in the middle of a hex tile as ideally a hex around 40mm across the flats would be ideal. I have enough Heroscape sea tiles to put together an area equal to 13 x 9 hexes which would be usable for a start although there was a really nice 5ft by 3ft hexed mat featuring hexes the same size as are used with Heroscape (these are roughly 45mm across the flats). It was on eBay for  while but I have been unable to see it since. As I own a great wadof Heroscape tiles this would be a good investment methinks as I have a number of ideas that really need to make use of smaller hexes - also the smaller hexes take the Command and Colours blocks far more readily.

Is there an ancients version of the portable naval wargame. I have been wondering about adapting it to different periods, like say Seven Years War. But haven't really pursued it yet.

No there is not as yet but I am sure that it could lend itself to the system without too much difficulty.

I will not be attempting that just yet though!