The small Fezian port of Rize was the principle centre for the processing of the tea crop, for which the region was renowned. Enormous quantities of tea were shipped throughout the length and breadth of the Fezian empire via this small coastal town and from the earliest times, the small port was a constant target for raiders and pirates. After the recent action in the western Fezian Sea, Rusland decided that it would, for the time being, confine its raiding activities to the eastern end of the sea and so naturally, Rize suddenly found itself in the firing line once again. 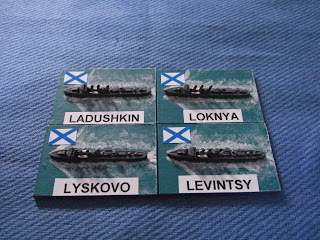 Admiral Saltykov decided that a quick raid by destroyers to bombard the harbour would be sufficient cause for the Fezians to redeploy their naval forces in order to counter the Rusland threat. His cruiser strength was currently down to a single vessel as although the turrets on the Muravev Amurtski had finally been completed, the damage sustained by the Amiral Kornilov and Admiral Nevelskoi was still under repair. Rather than risk an untried ship Saltykov decided that blooding his destroyers would be a less risky option. The Fezian patrol centred around the light cruiser Midilli.

Unknown to Saltykov was the fact that Fezia had already taken steps to extend her patrol lines to cover the approaches to Rize. Due to the shortage of gun destroyers (due in part to the torpedo based tactical methods championed by the Teutonian naval mission)  Fezia had taken to supporting her torpedo armed types with a light cruiser. At this paticular juncture, the cruiser Midilli, accompanied by two torpedo boats, had been detailed to patrol the approaches to Rize. The four destroyers that made up the Rusland raiding force was not expecting any enemy activity this far out and so the stage was set for an affair of light forces.

I will be using my usual rule set for this action and guess what? I have already seen a couple of very minor points that will need to be, ahem, adjusted. The main one concerns unarmoured vessels such as destroyers. The Light-1 gun dice discards the -1 when shooting at these vessels so the usual two point heavy hit for a 6 applies as normal. Further along from this, I am considering rules for the use of destroyer divisions of four ships as complete units - this will be really handy when fighting large actions (which will follow in due course).

Somewhere to the north of Rize, in the Eastern Fezian Sea.... 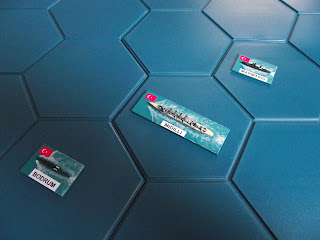 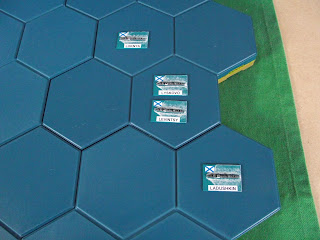 The Rusland raiders shake out into attack formation - the central pair will concentrate on the Fezin cruiser. 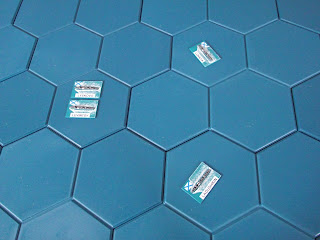 The Rusland destroyers complete their deployment with the central pair heading for the Fezian cruiser whilst the other two move out to either flank. 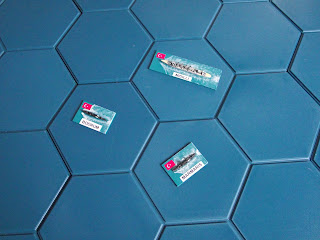 Meanwhile, true to their training, the Fezian torpedo boats form up on the unengaged flank of their supporting cruiser. 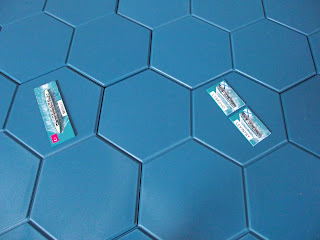 As the two forces close in the Fezian cruiser reverses course in order to engage the central Rusland destroyers as she passes them with her torpedo boats following in her wake. Shots were exchanged from both sides with the Levintsy taking minor damage. 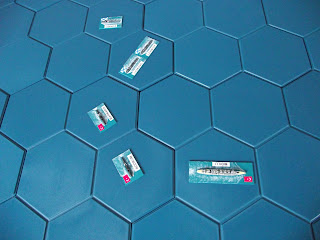 At full speed the two sides manouevre for an advantage with the Ruland destroyers closing on the rear of the Fezian line as their cruiser attempts to open the range. The cruiser opens fire and slightly damages the leading Rusland destroyer. Despite several near misses, the Fezians escape unscathed. 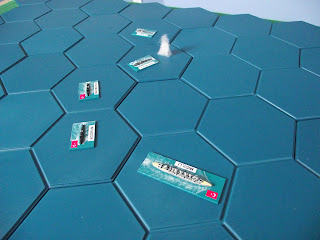 The Fezian torpedo boat Bodrum snap fires a torpedo at the pursuing Rusland destroyers and succeeds in sinking the Levintsy - her hull simply split in two under the impact! 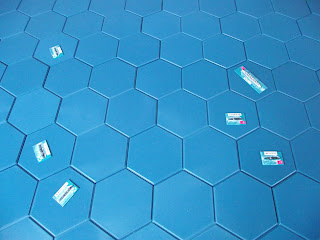 With one accord the two sides draw apart to reform and consider their next moves. 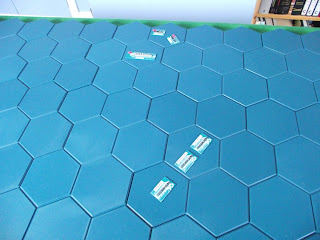 The Rusland ships form into line to renew the attack and to avenge the loss of one of their number whilst the Fezian torpedo boats again fall in with the cruiser. 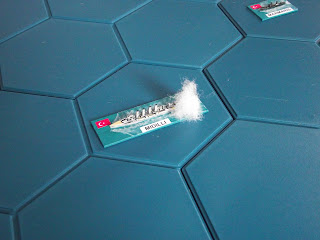 In a seemingly desperate gamble the Rusland destroyer Ladushkin fires off a single torpedo, more in hope than expectation, and scores a telling hit on the Fezian cruiser. 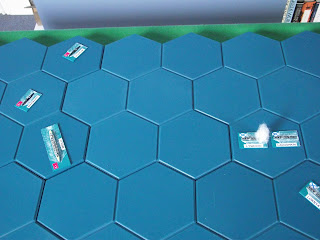 Despite her damage, the Fezian cruiser fights back hard and manages to cripple the Lyskovo with salvoes of 4.1" gunfire 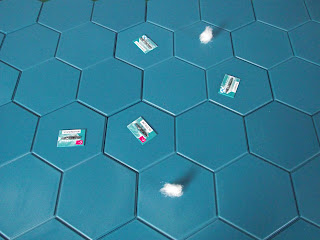 Disaster can be a fickle mistress - the torpedo boat Bodrum scores again with a torpedo and manages to send the crippled Lyskovo to the bottom. With a cruel twist of fate though, the Rusland destroyer Loknya manages to  torpedo the Fezian cruiser squarely amidships and she quickly sinks! 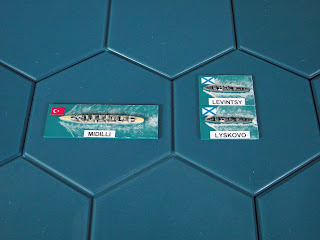 The final reckoning. The Fezians lost the cruiser Midilli in exchange for a pair of destroyers - all of which were sunk by torpedoes.

When the news of the loss of the Midilli reached the Sultan he was apoplectic with anger. His temper was legendary and his rage was only mollified by the Teutonian naval attache immediately offereing a replacement ship of the same class. His pride appeased the Sultan decreed that a press blackout would be imposed with the loss of the two Rusland destroyers being emphasised and with no mention of the Fezian cruiser. As ever the daily news would appear to the population as being calm, tranquil and with nothing out of the ordinary to report. "The Sultan took tea as usual" would be the official line but the glibness of the comment fooled nobody - possibly not even the Sultan himself.

It was fast, up close and personal. It was also the first time that torpedoes were used in an offensive capacity. The rules for these worked pretty well and to be honest, the Fezian cruiser was quite unlucky to be torpedoed twice at maximum distance - needing a 6 to do so at that range. I used the two Rusland destroyers that operated in the same hex (at least until one of them was sunk) as a single unit for damage meaning that any hits from gunfire must be alternated between the ships. In effect destroyers operating in such a fashion receive fire on an area basis.

So far then, my actions with this latest round of models have been limited to cruisers and destroyers. I am thinking that perhaps it might be an idea to get out the big guns and start wielding some battleships.

This will be the next action then - so I had better get the models painted!

A great little action, typical of the sort of naval skirmishes that took place from the end of the nineteenth until the middle of the twentieth century.

I am looking forward to seeing a fleet action on your tabletop, and I am sure that it will be taking place in the very near future.

Torpedoes are indeed brutal weapons but they needed to be fired very close - are you sure you have the effective ranges right?

The models are assembled and undercoated and only need the application of paint to be ready - I am starting on these tomorrow night so an action with battleships will not be long in coming!

At the moment what I am not taking into consideration is the target speed - or if the firing ship is under fire.

PS I am thinking that using a variation of the system from Jutland (the old Avalon Hill boardgame) may be a good idea.

Just a reminder that "Destroyers" is short for their original name/description . . . which was "Torpedo Boat Destroyers".

"At the moment what I am not taking into consideration is the target speed - or if the firing ship is under fire."

The danger with adding in these kind of factors is that the granularity of the rules may not take them very well. With only a single D6 in use, a situation needs to be fairly significant to affect the roll.

Of course the alternative is secondary rolls (maybe the target gets a 'save' based on their speed), but they can compromise simplicty.

Reading these game reports has really inspired me to get on with my WW1 stuff so far I have only one German battle cruiser finished, but at least it's a start.

With the torpedoes, are you using one standard size or were you thinking of light, standard and heavy types. May be adjust damage by type, +1 heavy and -1 light or maximum range could be tweaked for each type.

That range seems a bit long for the period I would think.

Do you permit being in the same hex as the enemy? If so, you could use your same system but at 0, 1 and 2 hex ranges.

Do you also have rules for streaming torpedo nets on capital ships? You could simply that just by having a further d6 for each weapon that hits, with success on say a 4+

Guilty as charged - my use of numerous variations on the theme was designed to confuse and confound.

It worked rather too well methinks as I ended up confusing and confounding myself!

That, my friend, is a very good point and I cannot help but think that is a whole can of worms to be explored!

Thanks old chap - for the kind comments and the idea that may be absorbed in some fashion!

Remember that even the Royal Navy of the Great War started with but a single dreadnought....;-)

These are all good and valid points although I would not introduce nets unless at anchor.

I need to do some research into this and the ability to engage at range 0 is something I should also introduce.

Much to ponder methinks but in the meantime - on with the 16 pre dreadnoughts!

Looks really good. What rules are you using?

Many thanks for your kind comment. I am very pleased at the results with the new painting technique - the models just seem to have more 'oomph' to them!

The rules in use are a version of Bob Cordery's Portable Naval Wargame. His blog is called Wargaming Miscellany and if you check it out it has all manner of rules goodies.