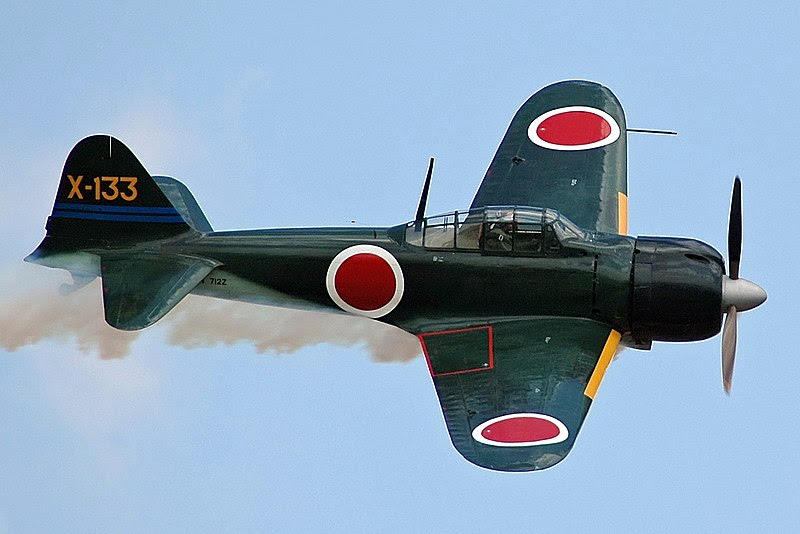 A6M3 Zero - this version was used in the film Pearl Harbour

Regular readers of the blog will no doubt be aware of the ongoing aerial activity I have been considering around the Axis and Allies WW2 air combat game. Essentially this has been around redploying the special abilities associated with each aircraft type. These abilities usually apply solely to the card for the aircraft in question which is fine if you are fighting one on one type games but less so for actions involving numbers of similar aircraft on one side. For the games we fight at the club we usually have the aircraft deployed in pairs as a minimum (my own collection is organised around flights of four aircraft) so it makes more sense to have a degree of commonality for similar types in use. A good example of this would be the 'Boom and Zoom' tactic employed by, in this case the Mustang P-51. In a nutshell the P-51 was historically very good at making slashing attacks whereby it would dive steeply and then climb up onto the target's tail. I believe that it would be more accurate, all things being equal, to allow all P-51s the ability to be able to make this type of attack, not just a particular plane/pilot combination as determined by the aircraft card.

I have already converted the pilot quality by nationality tables from the old Air Force game into the Axis and Allies format and so all that now remains for me to do is to determine which of the abilities from the cards can be randomly applied to the aircraft that are being used.

I realise this all sounds rather complicated but in reality it is quite staightforward. The hardest part was typing everything up but now that it is completed I should be able to turn the game into something a little more wargames like.

Thats the plan anyway.
Posted by David Crook at 21:39