I spent some time this afternoon having a bit of a tidy up of the painting tray. to begin with, I gave eight of the pre dreadnoughts some work with the decking and so should be able to finish them off tomorrow all being well and with the basing tackled on Monday. They should be in action on Tuesday, again, assuming nothing untoward gets in the way.

I also took the opportunity to clean up sixteen Stonewall WW1 German dreadnoughts and seven for the Royal Navy. I am awaiting a couple of replacements for the Royal Navy but made a start on the models in any event. For the Germans there is four of each of their main classes - Nassau, Helgoland, Kaiser and Konig (I know I need another Kaiser!) and for the RN the King Georges and a trio of Bellerophons received similar treatment. All very constructive I must say and very satisfying to complete. 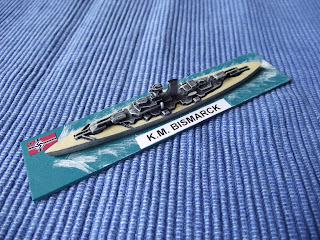 I know you have seen it but I could not resist showing it off again!

The models that I was being very coy about in the previous post in this series are of course, Bismarck and H.M.S. Renown and they both featured in the recent Battle of the Norwegian Bend (as opposed to the Denmark Strait....). These were a pair of samples Mark at Stonewall kindly sent me wit my recent order. Bismarck was a delight to paint, Renown less so as the casting was a little soft around the edges. I shall be acquiring more to go with these in due course! 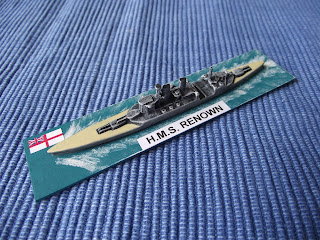 The 'not-quite-as-good-a-casting-as-Bismarck' model of H.M.S. Renown

I also had a moment of sheer whimsy as I rediscovered a box of goodies I acquired from Tim Gow some while ago. I won't give anything away (and I doubt if Tim will remember what it is) but it has just gone to the top of the painting pile after the pre dreadnoughts have been finished. It is self contained - meaning I won't have to add anything to it - and will provide something a little different for me to game with and an excuse to paint something a little more colourful....;-)

Still no word on the result of my second interview either....
Posted by David Crook at 18:43

I was happier with Bismarck overall but only because the Renown was not such a good casting.

The technique is a simple one and very effective - I just wish I had discovered it years ago!

I thought you had "lost" your WWII collection David?

Sorry I am getting confused (I also never throw things away)

This is a tale that grew in the telling - I gamed in 1/3000th years ago and then decided that 1/1200th would be a good idea. I then went for 1/1800th (using Axis and Allies War at Sea miniatures)but decided these were too large for home use and disposed of them. Then followed a lull as I considered a few options and finally settled on 1/4800th.

This passes for normality in my world....;-)