Leipzig on the Lawn - A personal review

On Saturday 23/09 I was fortunate enough to take part in a refight of The Battle of Leipzig, 1813 at a secret central London location. There was in excess of 2,000 54mm figures and the rules in use were Funny Little Wars - an updated version of H.G. Wells original Little Wars with a Napoleonic twist. The action was fought on the lawn and together with the two umpires there was around a dozen of us with yours truly taking the part of Napoleon. the full list of dramatic personae looked something like this : 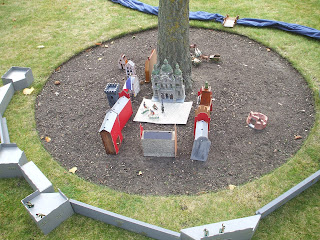 There will be other blog posts about this epic encounter together with some rather better quality photographs of the fun but I wanted to write about the game from a rather more personal perspective. 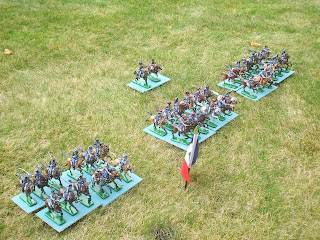 
I was supposed to attend a similar event at the same location and dramatis personae back in 2015 when a refight of Waterloo to coincide with the bicentenary was undertaken but sadly had to pull out at a late stage. I was taking no chances on missing out this time though and so it was I took part in a game that has made me look long and hard at pretty much everything I thought I knew about wargaming and how to fight battles with model soldiers. 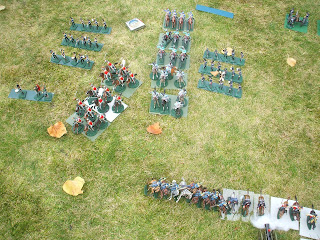 Allied cavalry supporting the Swedes under Bernadotte (Conrad Kinch) prepare to administer the coup de grace to the remnants of the Imperial Guard - but at a heavy cost.

The battle itself took place over some 5 hours of game time and started on the second day of the actual battle. This meant that the allies were in contact with the far flung French outlying forces almost from the outset. The French plan was simple - wait until they were rolled over and then retreat with what was left. It succeeded rather too well and at the conclusion the baggage train and the imperial staff were last seen heading towards Dresden and a single unit of cavalry and perhaps some of the guard possibly following.

In truth the French lost faster than the Allies won and at times one was almost reminded of the old arcade game Space Invaders.

The game had everything - high drama, massed cavalry battles, furious melees and some very random shooting. Normal artillery was handled using the time honoured matchstick firing model - in this case a 25pdr - whilst for canister rounds good use was made of party poppers - which was enormous fun for all concerned!

My own role as the Emperor during the early stages of the battle was merely to sit on my hands in Leipzig brooding magnificently, ideally with a Rod Steiger like vacant scowl. I also make a point of quoting every line I could remember from the film Waterloo or attributed to Boney himself - sometimes the comments were even appropriate. For example, in response to a written message from Ney asking whether or not he could engage the approaching Austrians  was responded to with the following missive "Engage. The salvation of France is at stake". I like to think of it as method wargaming....

Special mention should be made of the tussle between the Guard and the Swedes. Despite being outnumbered the Guard fully lived up to their reputation and significantly out shot their doughty opponents. Perhaps mindful of his political position Bernadotte (Conrad Kinch) tried not to cause too much damage to the French although the Guard had no such qualms when firing back....

The sole British unit - the Rocket Troop, assembled by Tim Gow - fell victim to an overshot French artillery barrage - the round in question completely missed the intended targets but such is the way of Little Wars errant artillery....

Camaraderie, good natured banter, lots of figures, good weather, great umpiring, beers, sandwiches, tea and scones and the chance to recreate in some small way a piece of history - what is not to like? Indeed, plans are afoot to conduct another game at some point next year and I only hope that I will be able to participate.

For my own part one of things that came out of the affair was they 54mm figures - even with a simple, flat paint job (old school style) - look quite splendid when deployed for action. Now I am not saying that I will be going full on Little Wars but using a modest number of figures on a 6ft by 4ft table, probably gridded a la Cordery/Morschauser, would certainly look the part.

Much to think about I assure but in the meantime a big thank you to Tim and PW for making it possible and all of the cast and crew - especially my two long suffering subordinates - for making the whole day a memorable adventure.
Posted by David Crook at 19:19

A splendid looking day. Glad the weather held off for you.

It was a fantastic day and if ever you get the chance to try Little Wars seize it with both hands! When I left my house it was raining but in central London the weather was fine. It was dry although a little cloudy.

Great fun although we all ached afterwards!

That does look splendid! Did any figures manage to get stepped on why the battle rages?

It certainly looked splendid! As far as I am aware there were no ‘stepped on’ casualties although a couple of transit damages were reported. All in all though and considering the amount of figures involved te breakages were minimal - no more than a few figures.

Bear in mind that most of the figures were plastic which helped!

I've enjoyed reading the various perspectives of the participants and observers. I'm beginning to think - as one who has tey to try it - that lawn war gaming is the ideal.

It was enormous fun and I would recommend it to anyone that has not attempted a battle on the lawn. Certainly as an occasional thing it’s would be fine. Whilst I could not see myself doing this on a permanent basis I am certain that using 54mm figures has a lot of mileage with other, more practical game systems - I am thinking something grid based on a 6ft by 4ft table.

Volley & Bayonet was originally played with 54mm.......Frank Chadwick is fond of this scale.
He and others ran a 54mm C18th Imagi-Nation campaign using VnB. Duke, Elector, King:

I remember seeing pictures in the original edition of Volley and Bayonet of 54mms in action. They are a great set of rules. Many thanks for the links - I will be sure to take a look at them for inspiration!

Great report, it captures the spirit of the day.

Hi Brian,
It was a great day and has had an impact on me for sure - my next blog post will reveal why!